He was born in St. Mary’s, Athlone, about December 1831 and nothing more is known about him until he enlisted on 24 October 1849, at Athlone HQ, aged 17 years 10 months. Between 1849 and 1855 he was a Private in the 4th Light Dragoons. The Regiment were in Ireland to stop the uprising and it is the time of the potato famine.

The Regiment was called back to Britain in 1852, and in August 1853 were in Brighton where it is possible William met his future wife, Marallah Maidens, who was a servant and cook for Lord Milford there.

On 19 July 1854 the Regiment embarked at Plymouth on the ship “Simla,” an iron steamship on their journey to Crimea.  In October 1854 he was at The Battle of Balaclava and was a participant in the “Charge of the Light Brigade”, which was an attack by British Cavalry against Russian Troops, where he was shot in the leg with grape shot (ammunition consisting of a number of small iron balls fired together from a cannon).. The Battle of Balaclava was part of the Siege of Sevastopol, which lasted from 1854 until 1855.

In 1855, wounded, he was eventually shipped to the Hospital at Scutari, where he came under the care of Florence Nightingale and her nurses, and from there was sent back to Britain.

He was awarded the Crimea medal with clasps for Alma, Inkerman and Balaklava, and the Turkish medal.

William was a Chelsea Pensioner by the aged of 29 (1861 Census). Discharged on medical grounds as he had been shot in the leg by a round shot from a cannon during The Charge of the Light Brigade on 25 October 1854, he was sent to Scutari on 27 October 1854 and then home to England. He had married Marallah in 1859.

The 1861 (April) Census he is listed (aged 29) as living in Brighton with his wife Marallah (aged 31) and daughters, Anne (aged 1) and Catherine (aged 2 months). His Occupation is an “Outpatient Chelsea Pensioner” with a pension of 9d a day.

In 1864 he welcomed his third daughter Susan.  They were, by this time living in Norwood.

This is to Certify that William Keenan of the 4th Light Dragoons was admitted an Out-Pensioner of Her Majesty’s Royal Hospital at Chelsea, on 16th October 1855 and receives a Pension of 9 per Diem. Given under my Hand, this 17th Day of October 1855

THESE are to certify, that No 1426 Private William Keenan born in the Parish of St Mary’s

in or near the Town of Athlone in the County of Westmeath was enlisted at Athlone for the 4th Light Dragoons on the 24 October 1849 at the Age of 17 Years. That he has served in the Army for Five Years and 296 Days.

That he is discharged in consequence of being found unfit for further Military Service from Wounds received in Action.

The Soldier’s Character to be inserted only when recommendatory; if the general conduct of a Soldier, whilst in the Service, has been such as to give him no claim to have anything said in his favour, the space for character in the above Certificate is to be cut off close under the black line following the confirmation of his Discharge, thereby leaving no opportunity for any addition to be made after the certificate is given to the Man.

When a Soldier is discharged on account of disgraceful conduct that will appear in the body of the Certificate.

On the back of the Discharge Form:

This is to Certify, that William Keenan late of the 4th Light Dragoons was admitted an OUT-PENSIONER of Her Majesty’s Royal Hospital at Chelsea, on the 16th October 1855, and received a Pension of 9d per Diem. Given under my Hand, this 17th day of October 1855, signed Secretary and Registrar.

N.B.-The personating or falsely assuming the Name or Character of an Out-Pensioner, in order to obtain his Pension Money or procuring any other to do the same, is made FELONY by Act of Parliament.

This Certificate is not transferable, and is no security for debt.

The Pensioner is desired to attend to the Instructions on the other side hereof.

Instructions for the guidance of the Pensioner in drawing his Pension

Any Pensioner guilty of violence or outrage towards Staff officers, or such other Persons employed under them in paying the Pensioners, will be punished by the loss, either of part or of the whole of his Pension, in addition to any other Punishment which the Law may inflict for such an offence.

Any Pensioner convicted of Felony or of an attempt to commit a fraud in the receipt of Pension or Prize Money, will be struck off the Pension List.

Out-Pensioners are not allowed to receive their Pensions in any Foreign Country (not forming part of Her Majesty’s Dominions), without special permission from the Secretary of War or the Chairman of Chelsea Hospital.

N.B.-These instructions apply equally to the cases of Men residing Abroad, as regards their removal to other Districts, and their conduct towards the Officer s by whom their Pensions are paid.

In August 1861 (aged 29), he was a Policeman for the Railways based at Crystal Palace Station for £1 1 shilling a week for the London Brighton South Coast Railway (LB&SCR).

He left the Railways and was reinstated as a Ticket Collector on 9 September 1865.  He was also a Riding Master of the Crystal Palace Stables.

Daughter Catherine and her three children – courtesy of Ancestry.co.uk

During the Depression, desperate for money, a member of the family sold the family medals, which included two awarded to William Talbot Keenan and two from a father in Law from the Boer War. The two from the Boer War have not been traced. William Talbot Keenan’s were traced on an auction site. His GGG Grandson, also has William Talbot Keenan’s riding spurs, the shot from his leg collected in The Charge which caused him to be medically discharged from the military, and his discharge papers, some of which are kept in an old family box, which has MM scratched into the mother of pearl on the lid. This probably belonged to Marallah Maiden, Keenan’s wife.

UPPER NORWOOD – We regret to announce the death of Mr William Talbot Kennan, for many years a riding master at the Crystal Palace stables, and formerly in the 4th Hussars, or as it was until recently called, the 4th Light Dragoons.  It appears that the deceased, who was an active member of the 4th Surrey Rifle Volunteers, attended with his corps the Dover Review, and there contracted a cold which led to his sudden and untimely demise.  His funeral took place on Wednesday, and was attended by a large number of inhabitants of Upper Norwood, by whom the deceased was well known and respected, about 50 members of the 4th Surrey corps being also present, under the command of Major Coles and Sergeant-Major Short.  The pall was borne by Messrs Ray, Haynes, Coppard, James, Ireland and Robinson and the ceremony was performed by the Rev Mr Roulle, after the rites of the Roman Catholic religion.  Mr Keenan had seen some service and had once been left on the field for dead; he wore some medals and was in receipt of a good service pension.  He has left a wife and three children totally unprovided for, but on whose behalf a subscription list has been opened and contributions will be thankfully received by Mr Jeffrey, at the Crystal Palace stables, or by Mr Hield, chief superintendent Crystal Palace station. 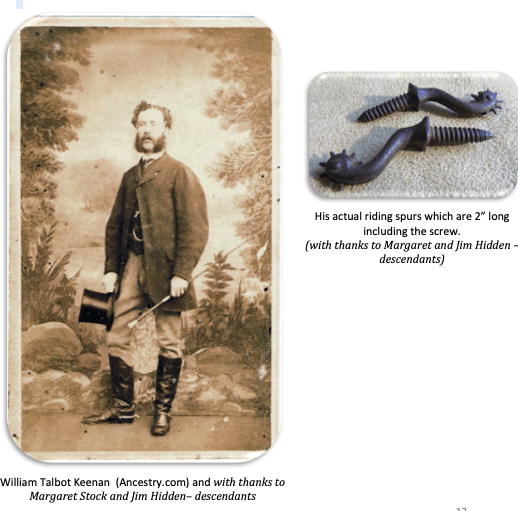 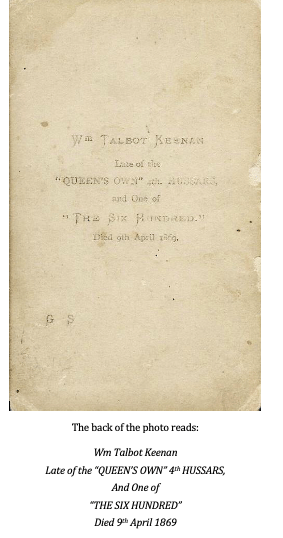 (with thanks to Margaret Stock and Jim Holden – descendants)

He died at Gipsy Hill, Norwood, Surrey on Aril 14th, 1869 aged 38 years. He is buried in an unmarked grave at Norwood Cemetery