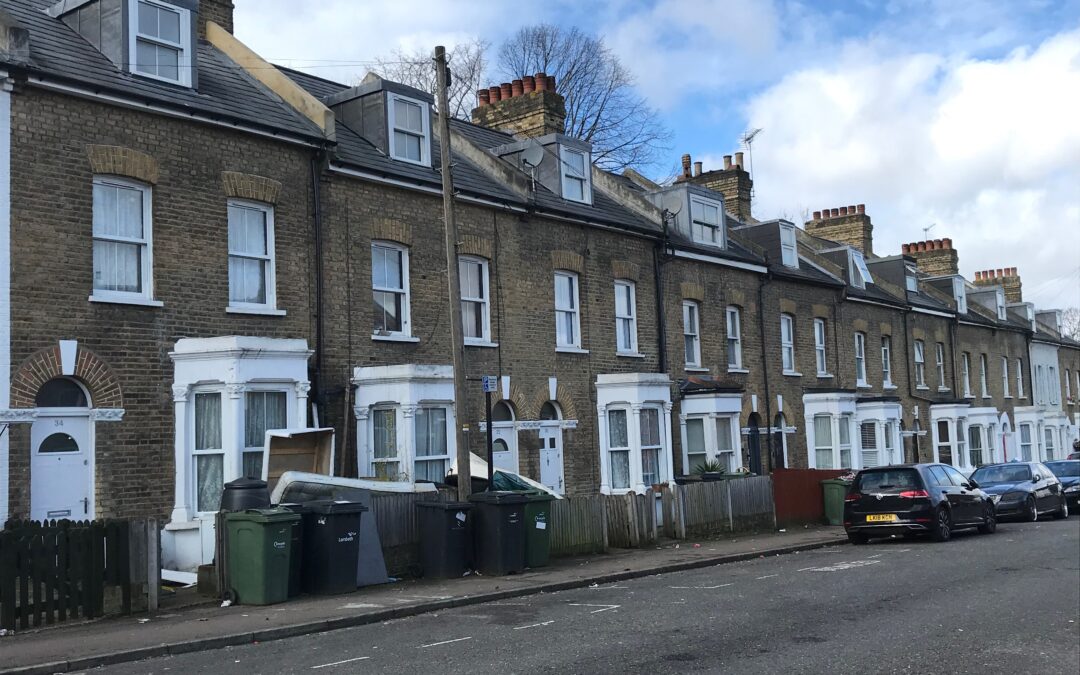 Berridge Road is a small road originally running from Salters Hill to Bristow Road. Once a traditional Victorian residential road built c1880s. Now only 13 of the original houses remain along the south western side of the road.   The rest of the road has been infilled with a variety of modern terraced houses and Alphabet Lanes nursery.

Berridge Road is a small road between Bristow Road (Bristow Road was originally named Barnfield Road), reached from Sainsbury Road, near Gipsy Hill Station (built 1867) or Whiteley Road from Salters Hill.  Once a traditionalVictorian residential road built c1880s, it now only has a few original houses on one side of the road. 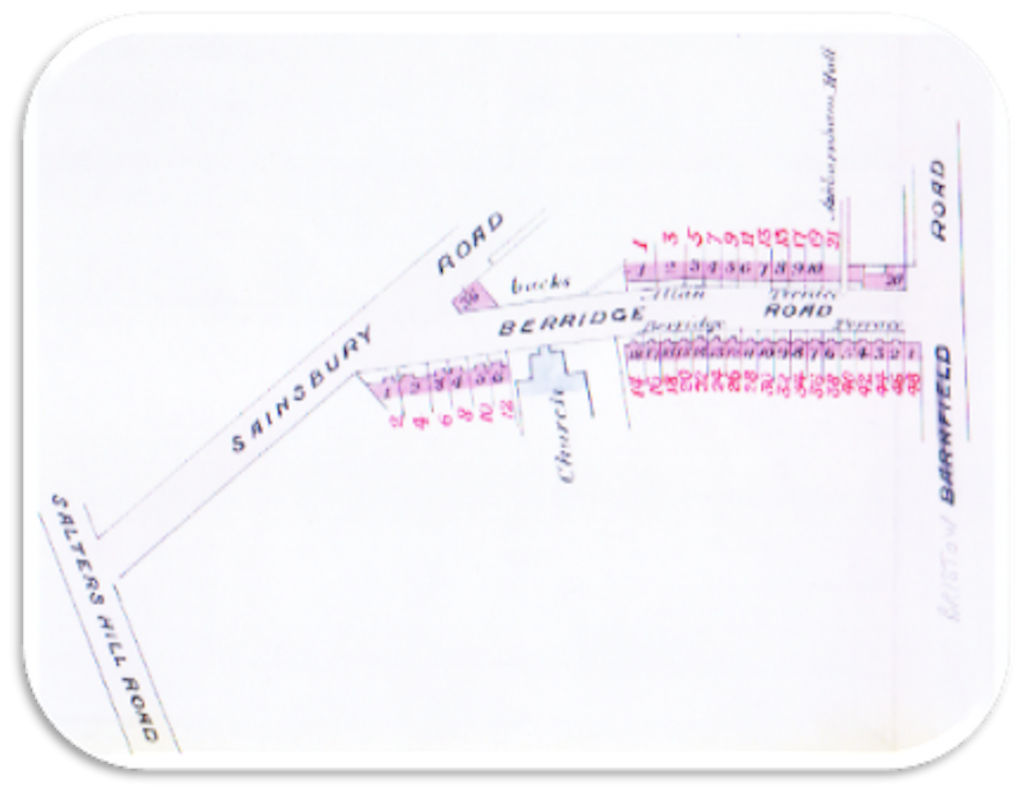 The renumbering of houses in Berridge Road – courtesy of Lambeth Archives 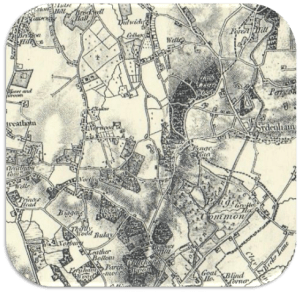 Berridge Road has not been created yet. It is still open fields with just Alexandra Road
and Victoria Road created there (c 1860) Gipsy Hill Station is close by.

Berridge Road off Sainsbury Road (which was originally named Station Road as it led to
Gipsy Hill Station). 1884 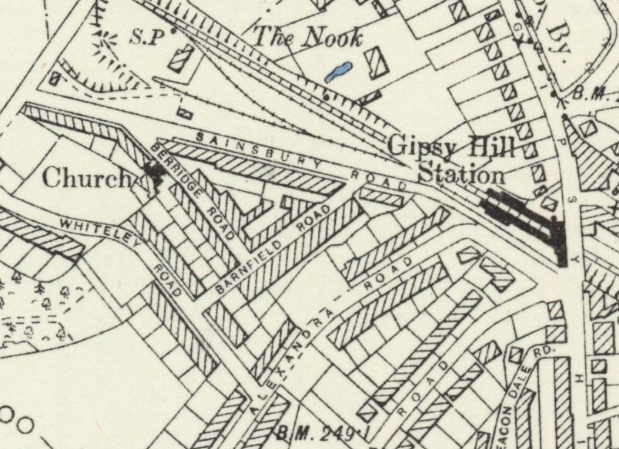 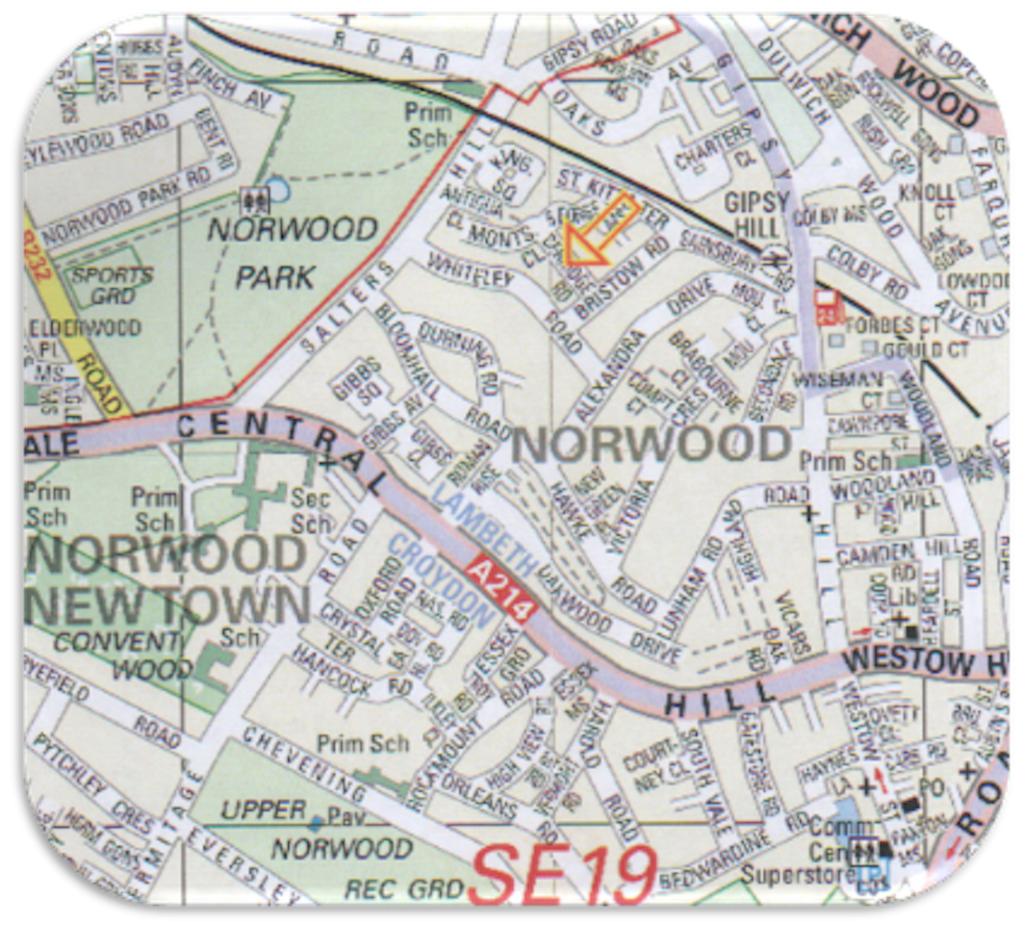 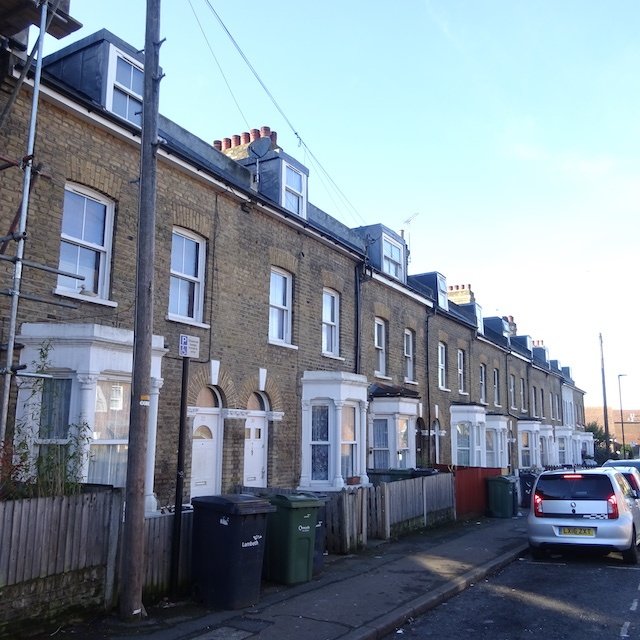 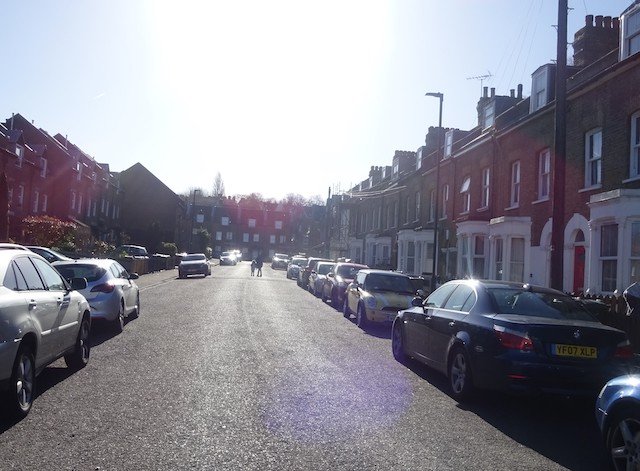 Original houses on one side of Berridge Road 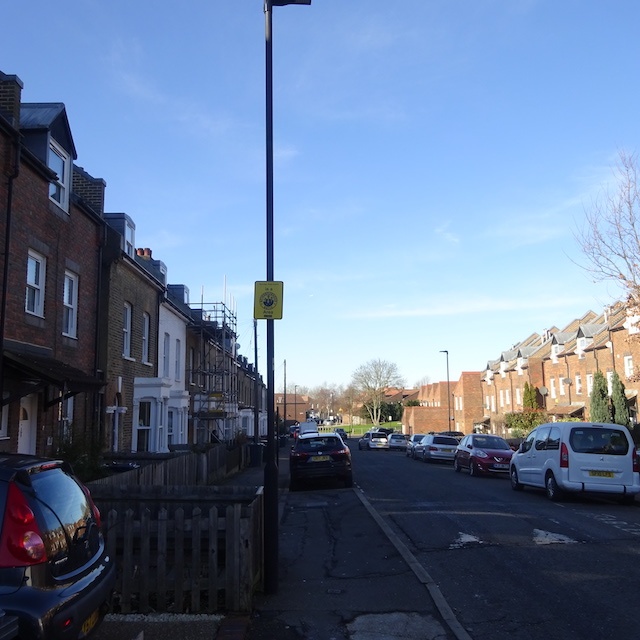 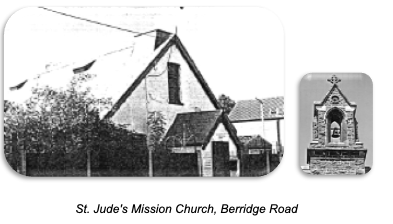 Advertisements for St Jude’s Mission This building was erected in 1880 as a mission church for the parish of Christ Church, Gipsy Hill. The architect was Frederic W Ledger. Described as “a small plain stock brick building of little architectural preten …

One family that lived in Berridge Road  was William George Starr, born 20 September 1878 in Old Windsor, but he moved with his family to Norwood by 1881.  His mother, Sarah, was a Laundress. 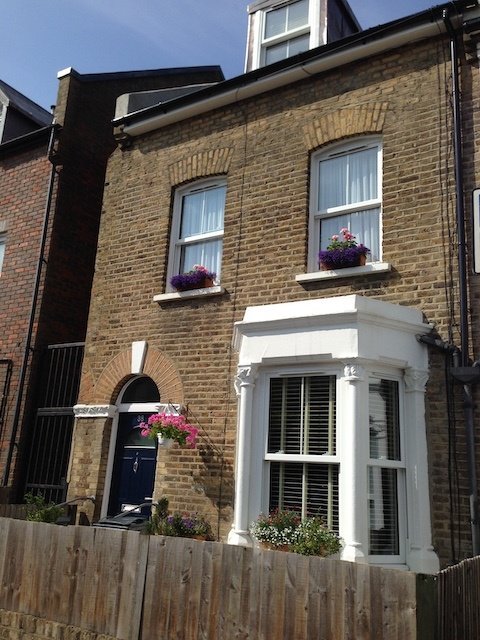 William Starr died on 11 May 1921 at 44 Berridge Road, Upper Norwood.  He was only 54 years old and had been a Packer of Paper in a Warehouse.  His daughter Rose Ann Starr, lived there until at least 1938.

On the Census Returns for 1881 until 1911, the following examples of information was submitted

Arthur Eden, a Boarder at No 17 Berridge Road (Bn 1891, son of a Grocer/Milk Carrier).  In 1901 he lived with his family at 25 George (Cawnpore) Street. In 1911 was a Boarder at 27 Woodland Hill (married Nellie at Christ Church, Gipsy Hill in 1912) and had become a Dental Mechanic/Artificial Teeth Maker. 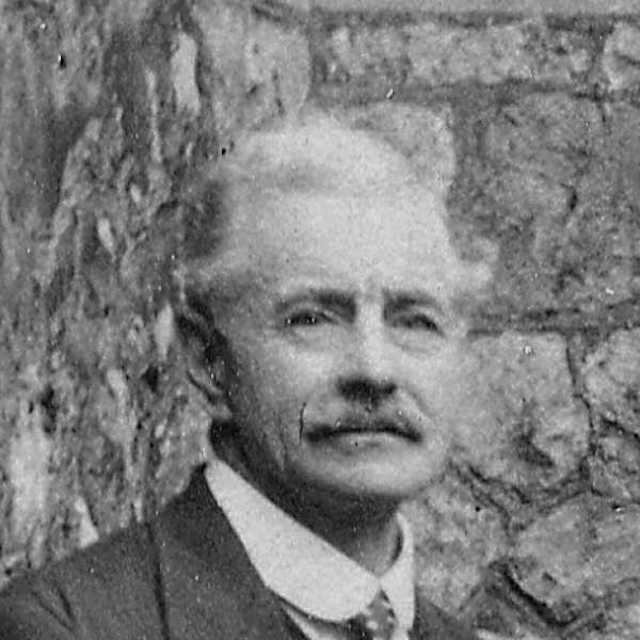 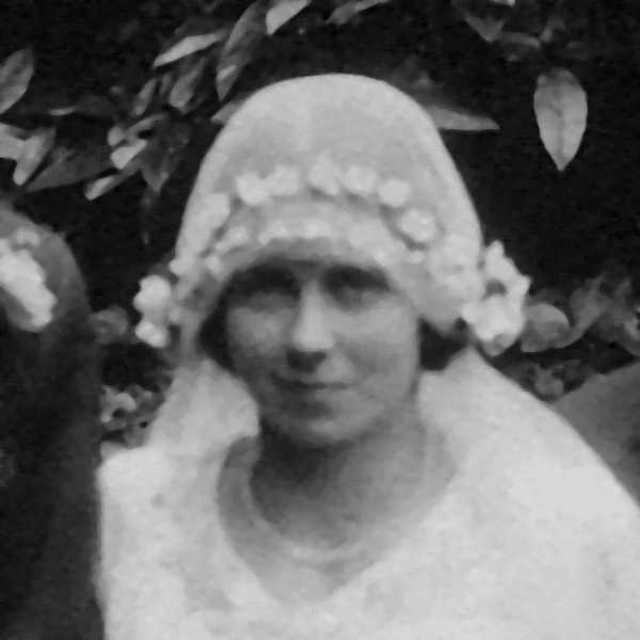 Thomas Dearsley (40) of 22 Berridge Road, Upper Norwood, was charged with braking a plate glass window, value £20 at 28 High Street, South Norwood, the property of Thomas John Tunstall Clark.  Prisoner said he was full up with beer and did not know what he was doing. Mr Clark said that at mid-day on Tuesday, he was in his shop when he heard a crashing of glass and he later found that the shop window was broken.  Prisoner, who was standing there, said, “I did it, guv’nor,” and when asked “Why?” he replied “I don’t know.”

PC 889W said that when he arrested the man he had the appearance of having been drinking.  Having no explanation to offer the magistrates, the Bench were of the opinion that there was no evidence before them to lead them to believe that the prisoner had any malicious intention to do Mr Clark any harm, but at the same time, drunkenness was no excuse for such an act, and to some extent prisoner must be held responsible.

He would be fined 20 shillings and costs.

Advertisements from the Norwood News

CHRIST CHURCH C.E.T.S – On Monday evening the Rev H Stuart Clark, gave at the Berridge Road mission room, a lecture on John B Gough, the great temperance advocate in connection with the C.E.T.S.

A heart-breaking advert Friday, 16 December 1887 in the Woolwich Gazette

To Widowers and Others – Wanted the care of one or two Children after Christmas; loving care; good home – Apply by letter to “M.A.,” 6 Berridge Road, Gipsy Hill, Norwood

YOUTHFUL HOUSEBREAKERS – At the Lambeth Police Court on Monday, Arthur Offen, 15, labourer, of 48 St Hugh’s Road, Anerley; Arthur Moore, 15, errand boy of 1 Berridge Terrace, Berridge Road, Gipsy Hill; Robert Wendland, 12, of 41 Queen’s Road, Upper Norwood; and Charles Mates, 14, errand boy, of 68 Romany Road, West Norwood, were charged, on remand, with being concerned together in feloniously breaking and entering a furnished house, of which, no one was in charge, at 21 Victoria Road, on 27th and 28th ult.  They were also charged with stealing therefrom four knives, a chopper, a saw, a waistcoat, a shirt, a waterproof, a coat, four glasses, two irons, two hats, two caps, a tea caddy, a cup and saucer, two plates and 11 painted ornaments, the property of Alfred Grierson – Margaret Conse, 32, married of 3, Albert Yard, Westow Hill, was charged, on remand, with feloniously receiving some of the articles. – Mr Hopkins now committed the whole of the prisoners for trial, Conse being admitted to bail.

Arthur Offen was sent to Wandsworth Prison, aged 15, his occupation as an Errand Boy.

In 1881 Robert Wendland had lived at 23 Ashburnham Terrace, Barnfield Road.

His father was a German musician.

Charles Mates married Louisa in 1905 and became a General Labourer at the Crystal Palace (1911). In 1891, his father was a Chimney Sweep (Romany Road, West Norwood)

1901 – ASTHMA and bronchitis – A gentleman who has been cured will gladly send particulars to any sufferer; enclose stamped envelope – Mr Lock, 14 Berridge Road, Gipsy Hill, S.E.

A service will be held at St Jude’s Church opposite his home, where the family worshipped.

Mr Holland had suffered from a nervous complaint following his work in the Heavy Rescue Service during the war.  He was at first attached to the Salters Hill depot and was later transferred to Brixton.  He had been ill for two years and died in

A life-long building operative, a trade which his two sons are also following.  Mr Holland took a keen interest in interior decoration, an art which he exercised in his own home.  He was also a keen allotmenteer. 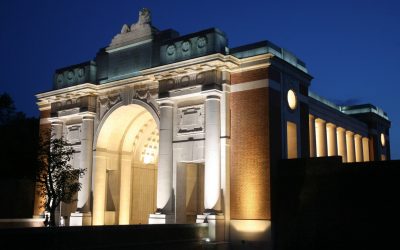 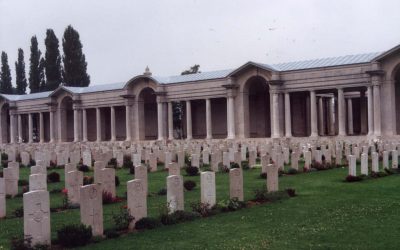 4th Battalion Royal Fusiliers Royal Field Artillery, born 1899, son of John (a police constable in the Metropolitan Police) and Agnes originally of 18 Berridge Road and later 26 Jasper Road.  He was killed in Action at Flanders on 10 April 1917, aged 1 … 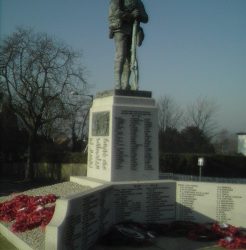 he was born in 1892, son of Elizabeth and George.  In 1911 he lived with his parents, three brothers and sister at 22 Berridge Road and was a carpenter’s labourer.  He joined the Household Cavalry, Dorset (Queens Own) Yeomanry.  He died on 30 January 1 …

LANCE CORPORAL ALFRED GEORGE JACKSON 4th Battalion Royal Fusiliers Royal Field Artillery, born 1899, son of John (a police constable in the Metropolitan Police) and Agnes originally of 18 Berridge Road(later 26 Jasper Road).  He was killed in Action at Flanders on 10 April 1917, aged 18.  He had 5 brothers and 3 sisters, whose occupations included a philatelic clerk, a sorter in a laundry and telegraph messenger. He is buried at Faubourg, Amiens Cemetery Nord-Pas-de-Calais, France.

PRIVATE ARTHUR ERNEST NORRIS/CH15352 born 31 May 1886, son of Frederick Norris (widower) a carpenter, and Hannah.  In 1901, lived at 19 Berridge Road.  When Arthur was 15, he was a wash house apprentice.  In 1911 when he was 24 he was already a Private in the Royal navy.  He joined the Royal Marine Light Infantry HMS ‘Natal’.   During World War I the ship was assigned to the 2nd Cruiser Squadron of the Grand Fleet, but did not participate in any battles.  Natal spent much of 1915 uneventfully patrolling the North Sea. He was killed by an internal explosion of the vessel on 30 December 1915.  His body was not recovered for burial.

PRIVATE CHARLES McKNO/TF 241278, born in 1895 son of Marcus (a baker) and Frances.  In 1901 lived with his family at 22 Berridge Road (later moved to Tooting).  He joined the Duke of Cambridge’s Own (Middlesex) Regiment 1st 8th (TF) Battalion.  In 1911 he had been an errand boy for a grocer.  He Died of Wounds on 19 April 1918 and is buried Ligny-St. Flochel British Cemetery, Averdoingt, Calais France.  He had a younger sister and brother.

PRIVATE 2439 HERBERT THOMAS LLOYD, born 1892, son of Elizabeth and George.  In 1911 he lived with his parents, three brothers and sister at 22 Berridge Road and was a Carpenter’s Labourer.  He joined the Household Cavalry, Dorset (Queens Own) Yeomanry.  He died on 30 January 1917 and has a war grave at Sevenoaks Cemetery.  He was 25 years old.

GUNNER LEVI BATTEN 204201 was born 1883.  Married in Christ Church, Gipsy Hill on 9 March 1912 to Sarah Minnie Bates when he was 29 and she was 30 years old.  He had been living at 24 Berridge Road(1901 & 1911), and Sarah at No 26.  He was a postman and his father, George William Batten, a policeman. He joined the Royal Garrison Artillery 1st Siege Bty and died on Active Service, a Gunner RGA on 15 August 1917.  He left behind his wife, Sarah and at least one child, Blanche Minnie, baptised on 5 October 1913, in Christ Church, Gipsy Hill.  He is remembered on Panel 9 Ypres (Menin Gate) Memorial, which means that his body was never found. 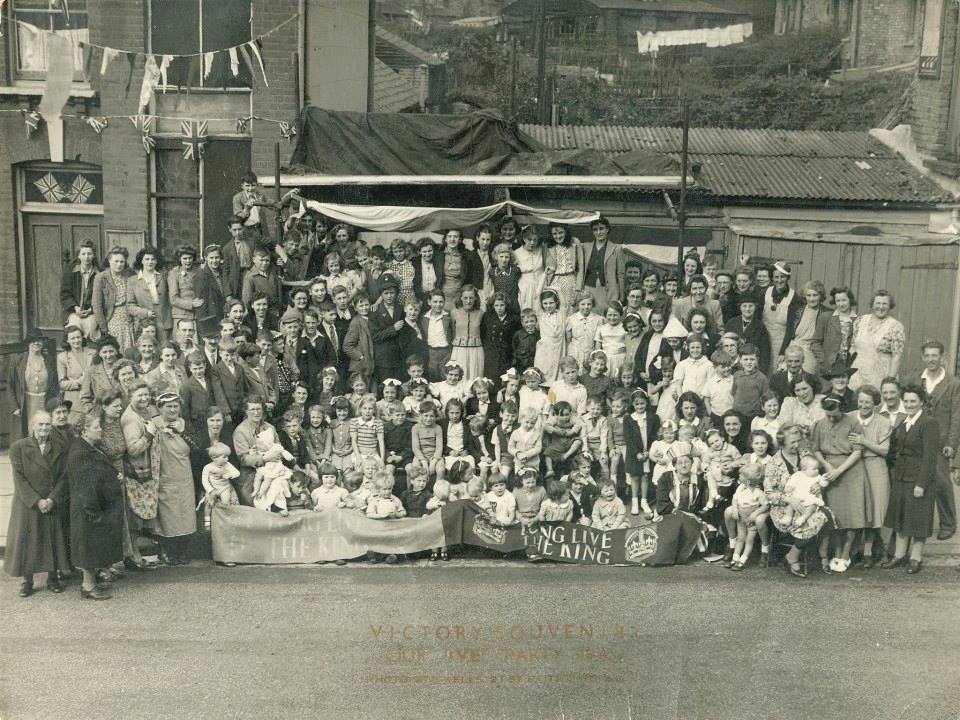 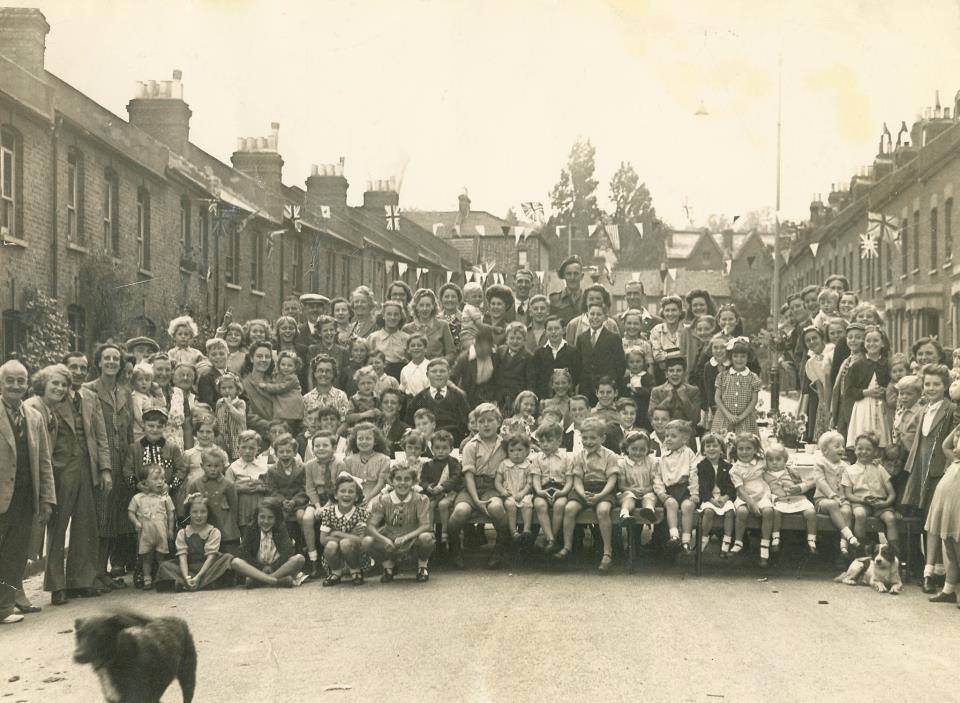