The Geography of Norwood

Norwood is a sprawling south London suburb including the areas known as West Norwood (Lower Norwood), South Norwood and Upper Norwood.  It is dominated by the ‘Norwood Ridge’ which extends north-south from Forest Hill to Upper Norwood.  The whole area is underlain by London Clay but the ridge top at Crystal Palace is capped by the more resistant strata of the Claygate Beds including sands and gravels of unknown origin which extend along Church Road.  The whole area was affected by permafrost during the last ice age.  (Baxter, 2010). 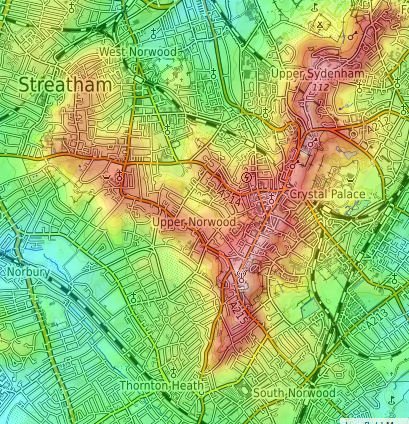 Pink is the highest land and blue the lowest. 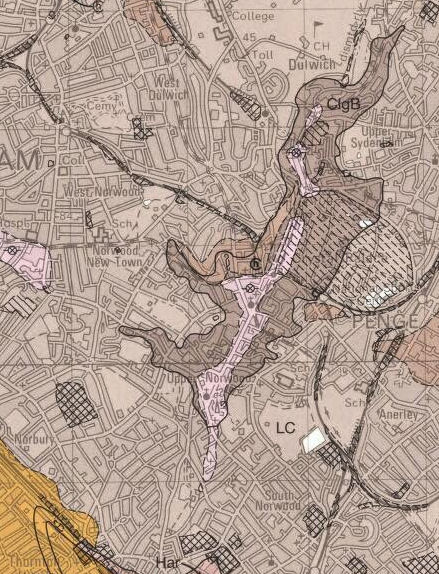 The Geology of Norwood 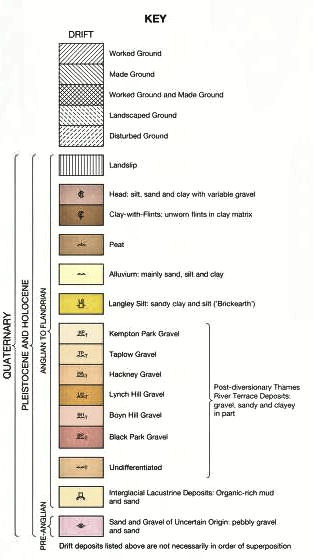 The Norwood Ridge splits into two spurs at the centre of Upper Norwood. One runs north-west (Central Hill) and one south-west (Church Road).  The spur divides into two again at All Saints’ Church, Beulah hill running north-west and South Norwood and Grange Hill running south-west.

These spurs form a series of watersheds. The streams in the valley between Beulah Hill and Central Hill flow north to form the Effra River which flows through Dulwich and Herne Hill to Brixton and ultimately into the Thames.  It is mostly underground nowadays.  The streams that flow south-east off the Church Road ridge join the Ravensbourne and eventually the Thames at Deptford Creek.  This drainage system includes a stream that rises somewhere near the site of Fox Farm at the foot of Fox Hill, flows through the open space between Maberley Road and South Norwood Lake, where it can still be seen in wet weather, into the Lake at its north-east corner and out at the south-east where it flows in a culvert under the playing fields and probably into a stream that runs along the northern edge of the Country Park. (Council, 2015).

The London Clay was not suited to farming but provided a useful resource for the numerous local brick factories such as Pascalls which once existed at the foot of South Norwood Hill on land now occupied by the Stanley Halls and Harris Academy. These brickworks produced the typical yellow London Stock bricks widely seen in the Victorian architecture of Norwood.  The red bricks were made from Oxford Clay and imported from outside of London.

The Norwood ridge reaches 126m in Church Road Upper Norwood and then slopes away to 54m at the foot of South Norwood Hill and 37m in West Norwood.   Rain water soaks into the Claygate Beds and appears as a series of springs where they meet the London Clay down slope.  One such spring being the origin of the Beulah Spa.

There are superb views form the ridge top a factor which influenced the choice of Upper Norwood as a site to locate their homes by the Upper middle classes and gentry of the Victorian era.  Westow Villa, now Rosetta Court, was one of the earliest of such homes being occupied by Lady Diana Hamlyn-Williams in the 1830s.

The Great North Wood was an exceptionally dense oak forest, recorded in the Doomsday Book, which once extended from Selhurst in the south towards Deptford in the north providing timber for uses including charcoal burning and ship building. By the 17th century significant parts of it were common land but only fragments of it remain on the higher land.  Ancient oak trees can be found in Crystal Palace Park, Grangewood Park, Beaulieu Heights and what were once the grounds of the Beulah Spa.

The settlement pattern is largely dense residential interspersed with small areas of industrial and commercial developments.  Most of the building development dates from the Victorian period and the boom in residential development which followed the growth of the railways.  The Victorian housing has areas of interwar suburban development.  Norwood was particularly badly hit by bombing during the Second World War and although some twenties housing was rebuilt in a similar style damaged Victorian stock has been replaced with denser higher rise developments.