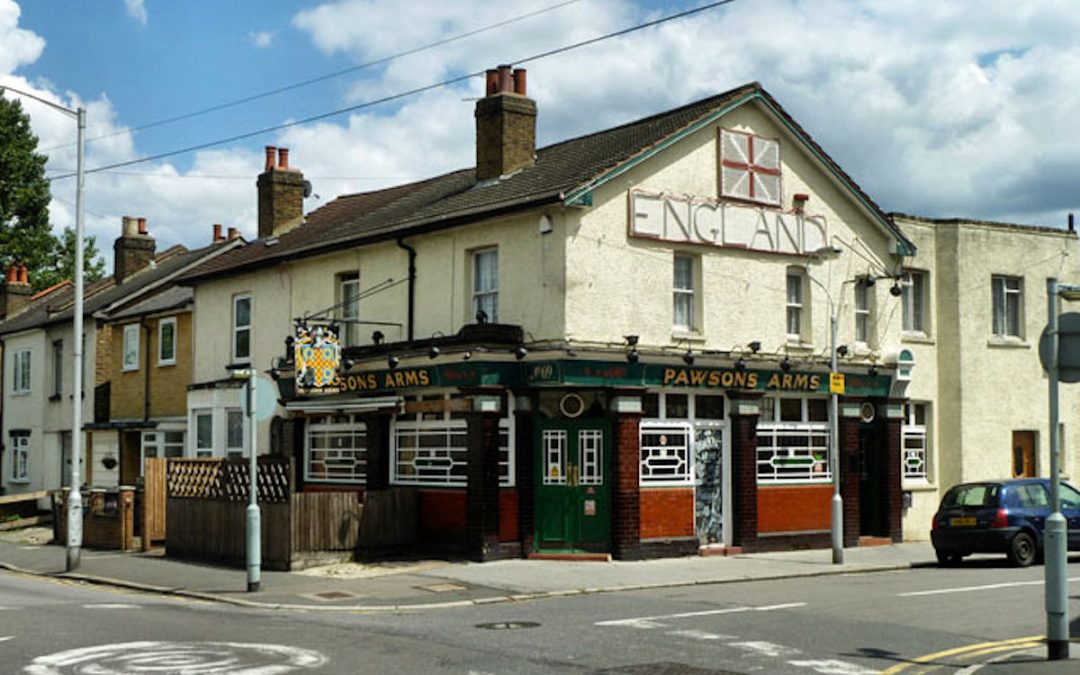 William Pawson was a major  local land owner  during the 1800s.  According to the 1847 Tithe map he owned the whole of the Whitehorse Estate which included the Whitehorse farm and the Beulah Spa grounds.  He was a wealthy magistrate living in Farnley, a parish of Leeds, Yorkshire.  He made his money as a woollen cloth manufacturer and merchant.  He was never resident in Norwood but his name survives locally; Pawson’s Road, Pawson’s Arms and Pawson’s Place.  Also to be found is Farnley Road, off Whitehorse Road, named after the village William lived in.  The tithe allotments for 1847 showed by then he owned 93 plots of land in Norwood.  He was one of the major land owners in Croydon along with the Archbishop of Canterbury, the Guardians of the Whitgift Poor Hospital and the Brighton & London Railway company.

William Pawson was born on 16 August 1794 in Farnley, Yorkshire.  His father was Thomas Pawson.    The 1847 Poll Book for Leeds records that William owned Stone Bridge Mill and associated buildings in Stone Bridge Lane, Wortley, Leeds.  Although extant today they are largely derelict.  There are major plans to transform historic mill buildings into 28 homes and build 98 new townhouses.  Protected Stonebridge Mills, which dates back to pre-1805 as steam-powered woollen mill, is Grade II Listed. But a planning statement by developers Stonebridge Mills Ltd says the redevelopment of the historic mills would be ‘sympathetic’.

There is some confusion about his wife’s name as it appears as Eliza Ann in the 1851 census but Sarah in the 1861 census.  He married Eliza Ann Beverley in September 1844.  They had five children: Thomas 1845, William 1848, John 1849, Albert 1850, and Charles Hall 1852. William made his money as a woollen cloth manufacturer and merchant in the Wortley district of Leeds.  According to the 1861 census he employed 197 men, 40 boys, 97 women and 32 girls.   He invested his money buying land in Norwood including the 50 acre Whitehorse farm where he employed three farmhands and a boy.  As the land was heavy London clay it was probably a dairy farm producing milk for local customers.  He became a local magistrate in Leeds but seems to have had no interest in Norwood other than land ownership, probably as an investment and to generate income

On his death on 3 December 1863 Whitehorse farm was passed to his youngest son Charles Hall Pawson.  Charles was married in 1879 to Celia Emma Cane in St Bartholomew’s, Church Sydenham.  Like his father Charles worked  managing the  manufacture of woollen cloth and continued to live in Farnley until his death at the young age of 32 in 1885.  on his death his estate (£3 million at today’s value) was left to his brother John.

An interesting co-incidence is that there is a 19 th century coaching inn located in Farnley named the ‘Beulah’!