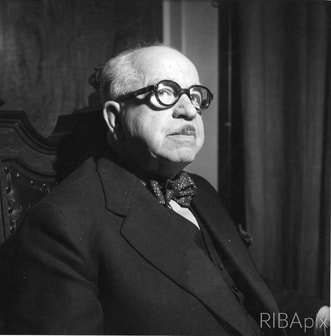 Thomas Wallis’s architecture is loved by those who appreciate Art Deco style but Nikolaus Pevsner the famous German architectural historian described his Hoover factory as ‘perhaps the most offensive of the modernistic atrocities along this road’ (Western Avenue, Perivale).

Thomas Wallis was the architect of some of the best-known inter-war
industrial buildings:  Firestone; Hoover; Glaxo Laboratories; Victoria
Coach Station to name but a few and yet his name is unknown by many and even less know that he was born in the Bricklayer’s Arms, Chapel Road, West Norwood.

Thomas Wallis was born to Thomas and Sarah Wallis in 1873.  His father was a bricklayer born in Norwood in 1841.  Thomas’s grandfather, also called Thomas was a bricklayer and later a building contractor who was involved in the construction of Dorchester House, London in 1853.  Thomas’s father diversified his income from bricklaying by becoming a ‘Licensed Victualler’ and landlord of the Bricklayers Arms, Chapel Road, West Norwood.

Where Thomas was educated is unknown but at some point he may well have studied at Norwood Technical College which then stood at the junction of Chapel Road and Knight’s Hill.

Thomas’s first employment was as a grocer’s assistant in a Chapel Road store which was part of the Bricklayers, (1891 Census).  Thomas trained as an architect in the practice of Sidney R J Smith at 14 York Buildings, John Street, Adelphi, London.  During his years with Sidney Smith, Wallis would have learnt much about the design of public buildings.  This is where Wallis would have gained the skill of relating his buildings to site and status.  Wallis brought monumentality and his own taste in decoration to his building designs.  He was elected as a member of the Society of Architects 13 December 1900 and was then practising on his own account at 15 York Buildings.

Wallis married his first cousin Edith Elizabeth Wallis at Christ Church, Streatham 4 October 1899.  Initially they lived at 3 Holmewood Gardens, Streatham where Douglas Thomas was born 3 November 1900.  In order to support his family he took employment as a temporary draughtsman in HM Office of Works and Public Buildings in 1901.  They moved to ‘Doric’ 3A Streatham Place, off Brixton Hill where their second son James Courtney, was born 12 December 1905.  He was promoted to the post of Architectural Assistant First Class in 1913. Their daughter Marjorie was born 26 December 1914.  Douglas eventually became an architect working in his father’s partnership.

From 1905 to 1913 he collaborated with James Bowden but although they entered a number of designs for various public buildings none was built until the 1909 extension of Stoke-on-Trent town hall; Marylebone Town Hall and the Port of London Authority head office; all of which enhanced their income and reputation.  Their drawings, mostly by Wallis, were praised for their clarity and excellence.  This partnership came to an end by 1913 when Wallis was based at Queen Anne Chambers, Tothill Street.  He was granted the ‘Freedom of the City of London’ 14 November 1912.

In 1916 Wallis moved his practice to Caxton House close to the offices of an American company, Trussed Concrete Steel Limited (Truscon).  Working as Wallis, Gilbert & Partner he collaborated with Truscon designing numerous industrial buildings.  Whether Gilbert ever existed or the name was used a ploy to make his practice sound more substantial is not known.  This system used concrete beams and reinforced iron bars, enabling his factories to appear light and airy.  Wallis was ambitious and his partnership with Truscon provided resources and a large base of clients at a time after the First World War when competition in the building trade was great.

Wallis was an astute businessman understanding that his business had to sell his designs and so he was mixing socially with potential clients and speaking the same language as them.  He persuaded clients that workers housed in modern buildings and were well-treated were more likely to remain loyal and highly productive.  Manufacturing companies recognised the need to devolve their activities into separate but intercommunicating departments something that Wallis excelled in designing.  In a talk to the Royal Institute of British Architects (RIBA) in 1933 he stressed the importance of high standards of materials and workmanship as being the most economical approach in the long run.  He regarded his designs as permanent contributions to what, in the future, might be regarded as the period style ‘George V’.

Wallis was a popular, if unconventional figure, affectionately known as ‘Tommy’.  He was good company, an asset to social gatherings and popular with his clients, many of whom became his personal friends.  His busy social life, constantly ‘roving eye’ and ‘extra-marital activities’ threatened his marriage to Edith!  Shortly after the death of their son Douglas on an operating table in 1932 they lived apart for some months.  Reconciliation the following year was not successful and in 1933 they separated for good.  Thomas then set up house with his former secretary Doris Mary Rudland, some 28 years his junior. By 1939 Thomas had moved to ‘Droyston’ a substantial semi-detached house in Stanhope Road, Hornsey by which time he was living with just a single domestic servant.

Thomas did maintain his earlier family in considerable comfort and took an interest in their welfare.  He wrote to his grandson Christopher encouraging his interest in classical architecture.  Christopher later became an architect.

Edith died 5 November 1946 and Thomas and Doris married the following April, moving their home firstly to Roehampton, then later to Chalfont St Giles, Ruislip, and Gerrard’s Cross.  Thomas and Doris moved house to Worthing 2 May 1953 when Thomas was almost 81.  He died suddenly two days later at the new house, 37 West Parade, Worthing.   His architectural practice continued under a number of similar names until eventually it was subsumed into a larger company.

Thomas Wallis was a draughtsman and watercolourist of no mean talent.  His leanings were as much in the direction of the art of his chosen profession as its basic structural aspects. Although always possessed by a strong commercial understanding his attitude to design was always informed by an appreciation of the visual impact of buildings and their relation to their environment.  Perhaps his most important contribution to architectural design was his involvement in the development of the ‘daylight factory’.  His modern reinforced concrete factories were accompanied by Egyptian-style decoration for which he is now often admired.

These are just some of the iconic buildings designed by Thomas Wallis.  For a fuller list see below.

The firm also designed a number of bus garages for London Transport and its predecessors  at:-