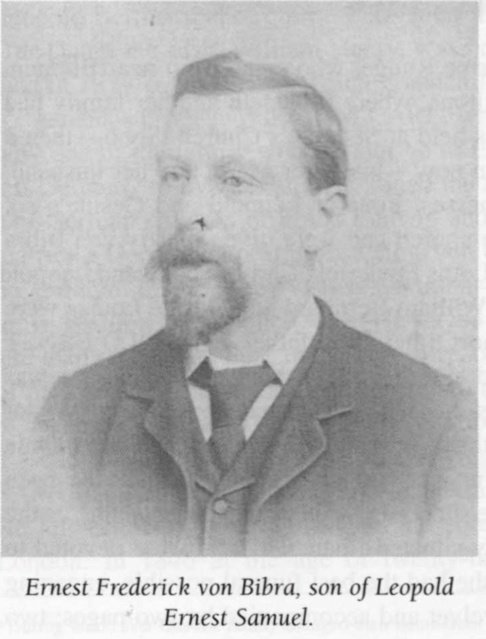 The von Bibras were an aristocratic Bavarian family. In 1819 Franz took up a position in the English court to tutor Augusta and Amelia the youngest of the ten illegitimate children of William IV and his mistress Dorothea Jordan.  William IV and Mrs. Jordan were familiar with south London having at one-time lived in Honor Oak Road, Forest Hill.

Ernest’s father Leopold was only two months old when his father, Franz, died in an accident in Tasmania, just eight months after the family had emigrated to live on the island.  At the age of six he sailed to Europe with his mother three brothers and sister to Altona near Hamburg. In he 1840s he moved with his mother to live in Hull. In 1846 Leopold married Gesine Wilhelmine Catherine Runge (1823-1879)[i] who came from near Bremen at St Anne’s Soho. Leopold died in 1860 at the age of 36 leaving Gesine to bring up five sons, including the twelve-year old Ernest Frederick.

Ernest Frederick had a gift for languages and by eighteen was working in London as a translator in both French and German.  At twenty-one he took a job as the as the Assistant Purser on the Oneida, a ship that took mail between London and South America.  He worked in Uruguay for a year before returning to London.  He married Jemima Cox (1849-1919)[ii] and they had three daughters before the arrival of Ernest John Leopold in 1881.[iii] His birth coincided with the family residing in Rockmount Road.[iv]  He was baptised at Christ Church, Gipsy Hill on 3 July 1881. His father’s occupation was given as wine merchant but I the 1881 census Ernest’s is recovered as being a restaurateur with 21 employees.

[i] 1881 Census Return for Rockmount Road