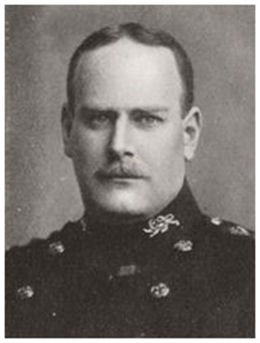 Hans Robert Sparenborg lived at 37 Lancaster Road and was one of the first two officers to fall in the Great War. He was born 2 November 1876 in Calcutta, West Bengal, India and was baptised 18 July 1886.  He was the first child of Johann Lubbo Sparenborg and Annie Charlotte Sparenborg, nee Belchambers and was born a German citizen.

In 1891 the Sparenborg family were living at 37 Lancaster Road, Norwood, London SE25 and Hans was educated at nearby Dulwich College between1887-1894.  He was in the college’s First XV rugby team in 1892, 1893 and 1894 and also played in the cricket team.  From Dulwich College Hans went to Gonville & Caius College Cambridge in October 1894.  There he joined the army as a University candidate entering the King’s Own Royal Lancaster Regiment in 1900.

Hans Sparenborg was present at the relief of Ladysmith in 1900.  On the 23 of May 1900 he was appointed 2nd Lieutenant 1St Battalion the King’s Own Royal Lancaster Regiment.  Hans served in the West African Frontier Force, May 1902 – Oct 1904. He was promoted to Lieutenant 22nd January 1902. On 28 November 1903 Hans sailed on the SS Jebba from Liverpool to Forcados, a small town in Burutu, a Local Government Area of the Delta State of Nigeria. The town stands on the Forcados River, a major navigable channel of the Niger Delta, southern Nigeria. It is about 20 miles (32 km) downstream from Aboh. He took part in the Kano-Sokoto Campaign, receiving the medal with clasp. (1903) He was also present during operations in Kabba Province.

Immediately following the outbreak of World War 1 the 1St Battalion King’s Own Royal Lancaster regiment was mobilised, as part of the British Expeditionary Force on 4th August 1914 in Dover, where it was stationed.  They sailed from Southampton and arrived in Boulogne 23rd August, France. They travelled on board the SS Saturnia which had been built as a cargo vessel but had been commandeered by the War Office as a troop ship.  The Battalion spent the rest of war on the Western Front.  (http://www.kingsownmuseum.plus.com/ww1.htm)

Within days the 1St Battalion King’s Own Royal Lancaster regiment were involved in bitter action at Haucourt, in the Battle of Le Cateau.  The battle of Le Cateau was fought on 26th August 1914 after the British and French retreated from the battle of Mons and had set up defensive positions in a fighting withdrawal against the German advance at Le Cataeu-Cambresis.

On the morning of 26 August the Germans arrived and heavily attacked the British forces commanded by General Sir Horace Smith-Dorrien.  Unlike the Battle of Mons where the majority of casualties were from rifle fire, Le Cataeu demonstrated the devastating results which quick firing artillery using air bursting shrapnel shells could have on infantry fighting in the open.  German artillery used indirect fire from concealed positions.

By midday the Germans, realising that the British stand was only rearguard, pressed their attack.  By mid-afternoon the British left and right flanks began to break under unrelenting pressure from the Germans.   Shielded by the French cavalry the British carried out a co-ordinated tactical withdrawal despite continued attempts by the Germans to infiltrate and outflank them.

That night the Allies withdrew to Saint-Quentin.  Of the 40,000 British troops fighting at Le Cateau, 7,812 casualties were incurred, 2,600 of whom were taken prisoner.  However the engagement at Le Cateau had achieved its objective and enabled the British Expeditionary Forces to retreat unmolested by the Germans for a further five days.

Captain Sparenborg was one of 64 recorded killed on 26 August less than a month after the outbreak of war and only 3 days after his arrival in France!

Captain Sparenborg was first reported to have been wounded in September 1914 and in October as wounded and missing.  He was included in the casualty list for April 1915 as officially reported killed or died of wounds. It was subsequently ascertained that he was killed in action on 26 August 1914 at Harcourt near Le Cateau. A Corporal in his battalion stated that he was killed by a bursting shell. He and Captain H H Shott, DSO, were said to be the first officers to fall in the Great War.