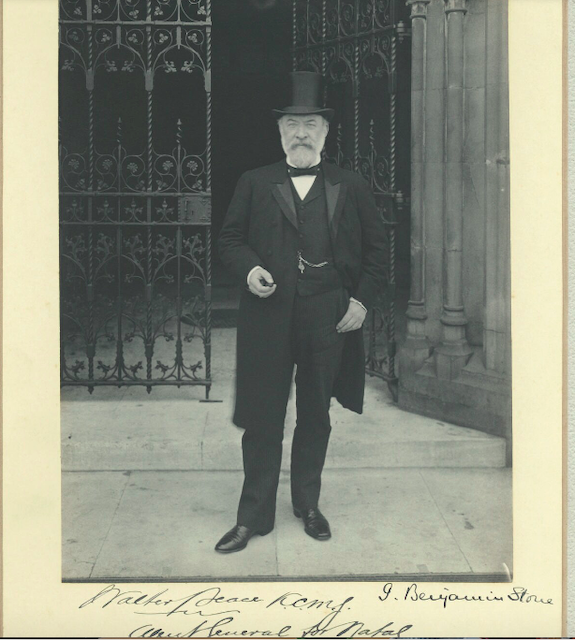 Was the well-known teacher of music who went out to South Africa in 1863 with Mr Charles North where he was Agent-General for the Colony at Westminster.  In 1880 he became Acting Emigration Officer for Natal and then took up the additional appointment of agent in London for the Natal Harbour Board.    He was the author of “Our Colony of Natal”.  Together with Mr Charles North he established the firm of North, Peace and Company, merchants and millers of Durban which then became Peace, Blandy and Company in 1866. When the mills and premises burnt down in 1867 the old firm was disolved and a new firm was established in 1869 under the name of Walter, Peace and Company.  The opening out of the diamond fields of South Africa changed his fortunes and the future Agent=General never looked back.  In this period he became Consul for Belgium and Vice-Consul for Portugal, taking an active interest in public affairs and promoted the development of the sugar industry for the colony and exported this product.  During his time in Natal he maintained one of the best Yorkshire traditions by taking a leading part in the musical culture of the colony.  He organised some high-class entertainments and rendered an excellent service as a conductor but also performed in the orchestra.  He was a member of the Natal Commission at the Colonial and Indian Exhibition.

He lived at 16 Central Hill in 1891 with his wife Caroline who was 50, his daughter Fanny aged 29 and his servant Sarah Boggis aged 31.