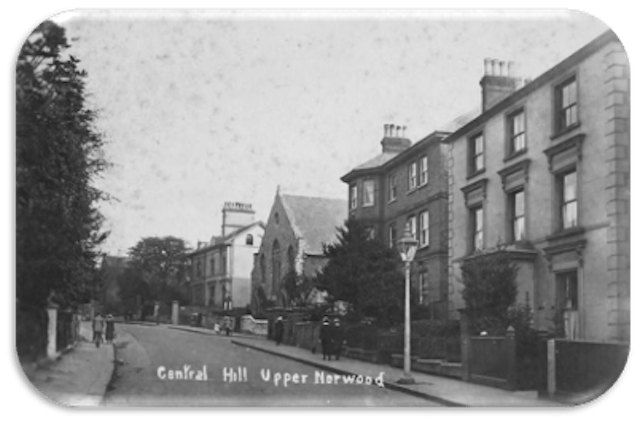 An article ‘Recollections of S.A. Tipple’ by Eric J Roberts, reflects the following:-

“The years of my boyhood, from eight to fourteen, were spent at my birthplace, Upper Norwood, where, at Central Hill Chapel, Samuel Augustus Tipple, exercised his ministry.  I remember being sent by my father to read the bulletins of another minister Charles Haddon Spurgeon.  As Tipple’s theological outlook was too advanced for my father’s taste, we did not attend Central Hill Chapel but had sittings instead in St Aubyn’s Congregational Church, under the Rev George Martin.  Not until my schooldays were over, did I claim the privilege of occasionally absenting myself from the family pew and going to hear Tipple. That I was able to do so at all I count as one of the supreme privileges of a life rich in privileges.  For no other preacher I have ever listened to make such an impression on me as he did.

With his slight, frail figure, his broad forehead, his mouth thin-lipped and sensitive, his whole face luminous with keen spiritual intelligence and fervour, he conveyed an impression of finely-strung but intense vitality.  His voice, although not a strong one, was very expressive.  He seemed to preach with his whole being, down to his very finger-tips and worshippers were held under a spell from the first word of the service to the last.  He preached without notes, yet so choice and apt was his diction that it could not possibly have been, as it appeared from his manner of delivery to be, extempore.  I was at a loss to think what could be the preacher’s method of preparation until, many years later, I met the Rev RF Guy-ton  who had been Tipple’s assistant.  My Guyton told me that Tipple’s memory was of the kind that is called visual.  On Sunday evening he would choose his text for the following Sunday (in later years he preached only once a Sunday).  He would read widely during the week and on Saturday write his sermon. While he was preaching, he could with his mind’s eye see what he had written and would mentally turn over one by one the pages of the manuscript which he carried with him in his pocket. A week later he would find that manuscript.

His sermons were characterised by remarkable range and freshness of thought, absolutely fearless candour, searching psychological insight and delicately sensitive accuracy of expression.  Four volumes of them were published – ‘Echoes of Spoken Words’ in 1877 (originally issued for private circulation)  ‘Sunday Mornings at Norwood’ which reached a second edition in 1895, ‘The Admiring Guest’ in 1896 and ‘Days of Old’ in 1911.  In addition, a book of selections from his prayers appeared in 1912, shortly before his death. 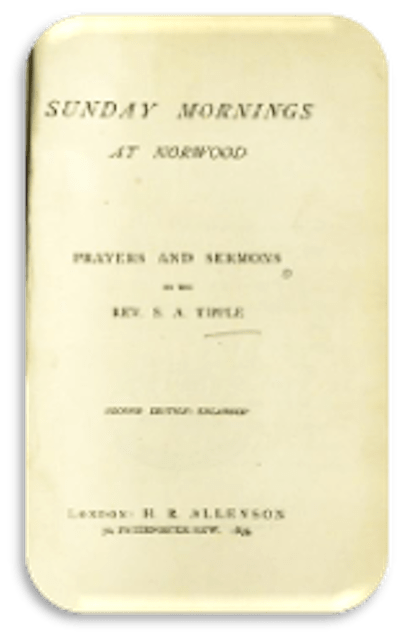 A distinctive feature of Mr Tipple’s services was the Scripture readings.  Instead of reading the whole chapter, he would make an anthology of verses from Old and New Testaments bearing on the subject of his sermon.  And how tellingly he could read!  It seemed so remarkable to me at the time, and still seems so, that on one occasion I found that I could remember the complete chain of verses and jot them down along with my recollections of the sermon”.   ERIC J ROBERTS