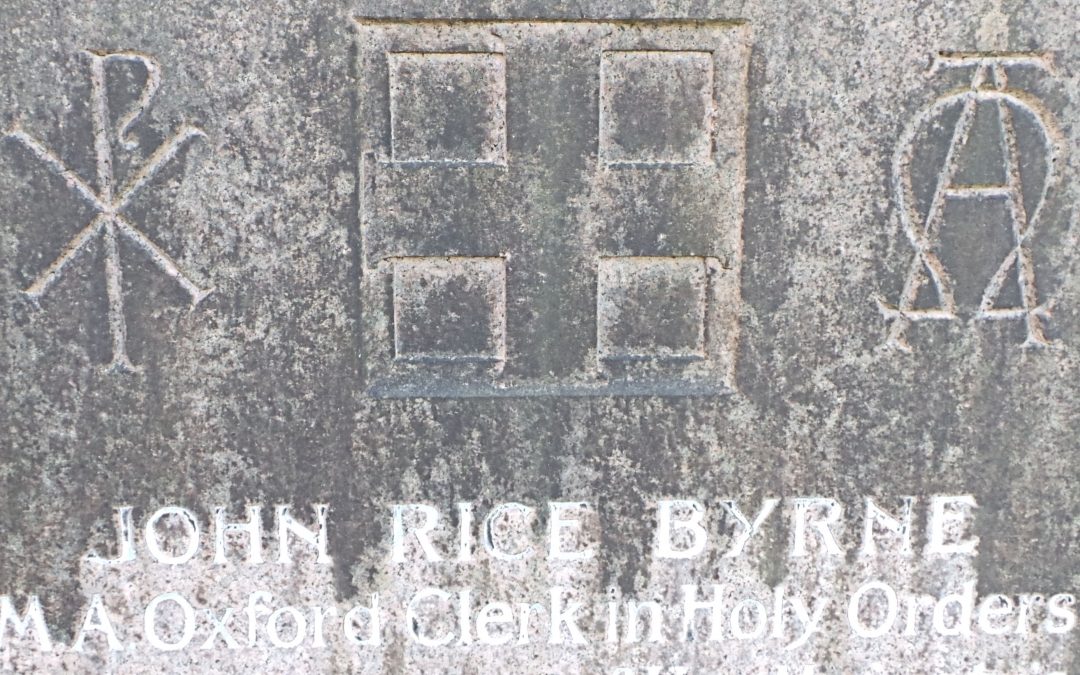 John Rice Byrne was born in Madras, India 6 August 1827.  He was the third son of Henry Byrne, Master in Equity of the Supreme Court of Chancery, Madras, India.  The family had returned to England by 1830 and were living in Bath, where John’s brother was born.  (Births, 1830).  He was educated at Rugby and then he gained a scholarship at University College, Oxford.

John married Ellen Gertrude Webb in the Parish church of Donnington, Herefordshire 31 May 1859.  At this time John was curate of St James’s Piccadilly, London.   Whilst there he wrote and published: “Sermons in Different Styles, Preached at St James’s, Piccadilly”. (Byrne, 1860).   They were living in Chelsea in 1861, where their son Lionel, Stanley Rice was born in 1863.   Queen Victoria appointed John as one of Her Majesty’s Assistant Inspectors of Schools. (Harrison, 1862).    He was one of the founding Trustees of St John’s, Upper Norwood, in 1875 donating £105 towards the building costs.  St John’s began on its present site as an “iron church” dismantled and moved from Grange Road and then re-erected in Auckland Road in 1875.  As it was being re-erected, a gust of wind brought down the south side which had been lifted into position, killing a workman, and then the contractors went out of business.

The Byrne family probably moved to Greville Lodge, 359 Grange Road in 1875 when its name was changed to Grange House, which it retained until its demolition in 1966.  Shortly after moving in their daughter Evelyn Dorothea Adelaide was born there.

The retirement of Reverend Byrne, in 1893, was recorded in the Surrey Mirror, and the ceremony described in some detail.  Many members of the local “Great and the Good” were present. Until that point he had been School’s Inspector for Croydon, Epsom, Kingston, Richmond and Wimbledon and had given more than 40 years service.  It was stated that “he had been like a father as well as a sincere friend” to many teachers.  In recognition of this one of Erard’s two hundred guinea grand pianofortes had been purchased, with the understanding that it would eventually become the property of his daughter Evelyn.  After grand speeches and votes of thanks the pianoforte was uncovered and Evelyn played on it “Ramboula” in a manner which showed her, in spite of her young age of 14, an accomplished pianist.  Mr and Mrs Thompson, for South Norwood Schools, gave “When the wind blows in from the sea” and the proceedings came to an end with the National Anthem.  (Retirement of the Rev J R Byrne, 1893).

The Reverend Byrne died at Grange House 29 August 1907 and left the sum of £11,598 12s 11d (One million at today’s value), to his widow Ellen.  He was buried, like so many local residents after the closure of All Saints church yard in 1869, in the Church Yard of St John the Evangelist, Shirley, Surrey.

His widow Ellen continued to live at Grange House until her death there 13 December 1914, when she joined him in Shirley.  The house was then occupied by their daughter Evelyn Dorothea Adelaide Byrne until 1939.  After the War, Grange House was converted into four flats and Evelyn continued on in one of them until at least she died there in 1963 aged 83.  Currently the land is occupied by a block of 18 flats called Owendale.  However the original gate posts survive now labelled ‘Owen dale’.