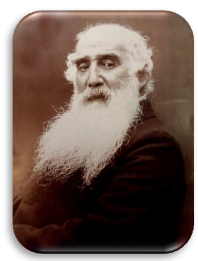 In April 1871, one resident, the Danish-French Impressionist painter, CAMILLE PISSARRO (Bn 10 July 1830 Danish West Indies (now the US Virgin Islands) D November 1903 Paris aged 73), lived at 2 Chatham Terrace, which was renumbered as 65 Palace Road some time later in the 1870s.  He must have lived there before or after 7 April 1871, as he does not appear on the Census for that year

In September 1870, Pissarro fled Louveciennes, a suburb to the west of Paris to escape the Franco-Prussian War and lived in Norwood from the end of 1870 until he returned to France in June 1871.  He returned here in 1892.  He had recently married Julie Vellay (Bn 1838 D1926 France) a Vineyard Grower’s daughter, in 1871 at the Croydon Register Office. They had eight children.  She was considered by others of lower social standing, being his mother’s maid.

Pissarro was an Impressionist painter, painting twelve watercolours and sketches of known local scenes in Norwood, including Fox Hill, St Stephen’s Church, All Saints Church in the Snow, and The Avenue, Sydenham (which has been displayed in the National Gallery).  Fox Hill was only a short walk from his residence in Chatham Terrace, Palace Road.  A list of his Norwood paintings include: All Saints’ Church in the Snow

He also lived at 2 Westow Hill (now commercial premises), where a Blue Plaque is displayed on the wall.

Camille Pissarro recounts his time in Norwood in a letter in 1902 a few months before he died, writing “I found myself in London with Monet and we met with Daubigny and Bonvin.  Monet and I were very enthusiastic over the London landscapes.  Monet worked in the parks, whilst I, living in Lower Norwood [it was actually Upper Norwood], at that time a charming suburb, studied the effects of mist, snow and springtime.  We worked from nature”.

He was also a well-known very successful race–horse breeder and in 1885 participated in races such as the 2000 guineas, the Oaks, and the Grand Prix de Paris in which his colt Paradox won first place.

In 1897, he was involved in the Klondike Gold Rush, where he worked for a development project for the Canadian Mining Company.  Two years later, in 1899, he edited and republished the book ‘The History of the Great Boer Trek and the Origin of the South African Republics’, which had been written by his grandfather, Henry Cloete.

On 7 May 1915, he was a passenger on the British ocean liner, the RMS Lusitania, which was torpedoed by a German U-boat.  She was not armed for battle and sank in 18 minutes, killing 1,198 passengers and crew.  His body was never recovered or identified.