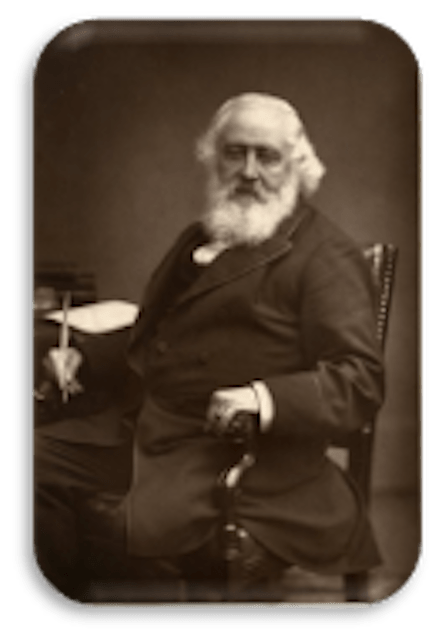 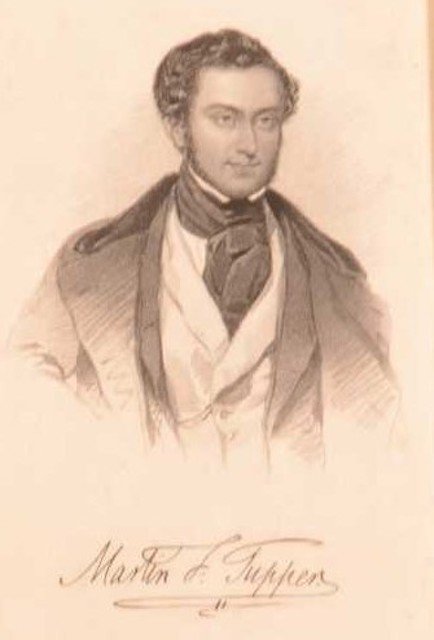 MARTIN FARQUHAR TUPPER (Bn 17 July 1810 D 29 November 1889) was an Author and Barrister, who lived at ‘Trillorde Underhill’, No 13 Cintra Park (1881 Census), wife Isabella (aged 69), sons William (aged 36), Walter (aged 36), a Civil Servant for the GPO, daughters Ellen (aged 44) and Authoress and Margaret (aged 40) also an Authoress.  They had one Servant, Amelia Edwards (aged 34 from Bermondsey).  He was an English writer, poet and author of ‘Proverbial Philosophy’.   He also corresponded with Charles Dickens. 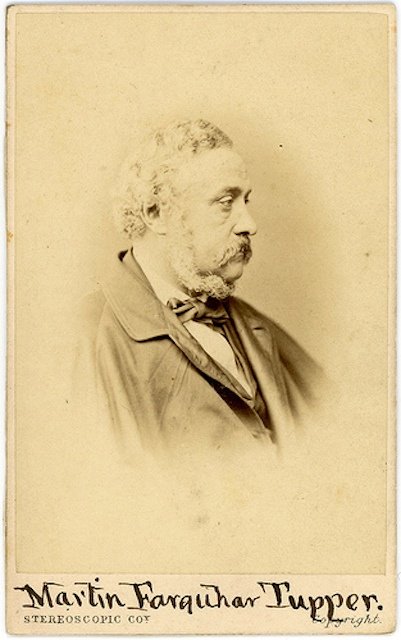 Some of his quotes include:-

The choicest pleasures of life lie within the ring of moderation.

Humility is the softening shadow before the stature of Excellence, And lieth lowly on the ground, beloved and lovely as the violet.

If thou wilt think evil of thy neighbour, soon shalt thou have him for thy foe.

Age hath its quiet calm, and youth enjoyeth not for haste.

Hatred is the atmosphere of hell.]

A good book is the best of friends, the same today and forever.

Martin Farquhar was the eldest son of Dr Martin Tupper (1780–1844), a medical man highly esteemed in his day who came from an old Guernsey family.

Martin took his degree of M.A., at Christ Church, Oxford in 1832 and became a student at Lincoln’s Inn and was called to the Bar in the Michaelmas Term, 1835. However, he did not ever practice as a barrister. In the same year he married his first cousin once-removed Isabella Devis, by whom he was to have four sons and four daughters. About the same period Tupper’s literary career commenced. He contributed to the periodicals of the day, but his first important essay in literature was a small volume entitled ‘Sacra Poesis’.

In 1837 the first series of ‘Proverbial Philosophy’ appeared, moralising composed in a lawyer’s chambers in Old Square, Lincoln’s Inn, during part of the previous year.  Tupper had been encouraged to publish by Henry Stebbing. A typical example is: “Well-timed silence hath more eloquence than speech”. His work met at first with moderate success in Britain, while in the United States it was originally almost a total failure. Over the next thirty years, by 1867, it passed through forty large editions in Britain, while nearly a million copies were sold in the United States. His blank verse is essentially prose cut up into suitable lengths; but Proverbial Philosophy contained apt and striking expressions and appealed to a large section of the public.  In 1845 Tupper was elected a Fellow of the Royal Society. He received the gold medal for science and literature from the King of Prussia.

Known as a genial, warm-hearted man, Tupper’s humane instincts prompted him to support many reforming movement.  He was an early supporter of the Student Volunteer Movement and did much to promote good relations between Britain and America. He tried to encourage African Literature and was also a mechanical inventor in a small way.

Tupper journeyed around the eastern United States and eastern Canada. He had no set programme but let friends organise his itinerary. He also pursued publishers for payments, unfortunately with very few positive results. In April he visited Washington and met with President Fillmore who received him in Tupper’s words” very kindly and cordially, and avowing himself a great lover of my works and my Internationalism.” He met the President a second time on 8 May 1851 and had dinner with him in the White House. Two days later he accompanied Sir Henry Bulwer the British Ambassador to speak to the Maryland Historical Society in Baltimore.

He returned on a paddle steamer on the SS Arctic, at the cost of £27. This boat was to sink after a collision in fog in September 1854 off Newfoundland, with the tragic loss of around 315 lives, including all the women and children.

It would be another quarter of a century before Tupper returned to the USA.  By 1876 his popularity had fallen, but less so on the other side of the Atlantic.  After a rough voyage he arrived in New York on 12 October 1876.

Tupper carried out a series of public readings with varying success. A New York journalist described him as “ one of the most amiable and kind-hearted gentlemen”. In Philadelphia he appeared before an audience of several thousand.

On this trip he had a breakfast party with the unlikely coupling of P T Barnum and, a future Liberal Prime Minister, Lord Rosebery.  On 22 December1876, at Delmonico’s restaurant in Manhattan, he attended the annual dinner of the New England Society and met Mark Twain. The Missouri born author gave a humorous speech on the subject of the local weather:

“Gentlemen: I reverently believe that the Maker who made us all, makes everything in New England — but the weather. I don’t know who makes that, but I think it must be raw apprentices in the Weather Clerk’s factory, who experiment and learn how in New England…”

Twain was a fan of Tupper and often quoted him. In 1933 the Oxford English Dictionary of Quotations reduced the number of Tupper quotations from thirty five to one, the last survivor being “a good book is the best of friends, the same today and forever.”

In 1880 Tupper moved with his family to Underhill, today No 13 Cintra Park. Tupper called the house a “suburban box” but it was a happy family home.  As an old man he would visit his daughter’s art studio climbing the many stairs in a house in Palace Road where Margaret gave art lessons. At the end of 1885 he began to write his autobiography, and celebrated his golden wedding on 26 November, to his wife Isabelle. He alludes to the proximity of one of the great Victorian buildings to their home when he says at Norwood he is “within constant free hearing of the best music in the world, at the Crystal Palace.”

With deep regret, which we are sure will be shared by our readers, we have to announce the death of Mr Martin F Tupper, who passed away at 2.30 on Friday at his residence, Cintra Park.  Mr Tupper, who had reached the venerable age of 80, has been in failing health for some time, and the feebleness and exhaustion gradually increased till the end.  He was the author of numerous works in prose and verse, his last being entitled “My life as an Author”.  We beg to express our deep sympathy with the bereaved famil

At the end of his life he vanished into obscurity, despite the words on his gravestone in Albury churchyard: “Although he is dead, he will speak.