Henry was the son of Major-General Robert Anderson, and attended Dulwich College in 1882. Originally training in the Merchant Navy, he changed his career and entered Sandhurst in 1887, and was posted to Quetta, India the following year. He remained in India for a quarter of a century, being promoted several times until becoming Lieutenant-Colonel in 1914.

He was at home in England when war broke out, and immediately joined the Indian Expeditionary Force, fist in Egypt, before landing in Marseilles on 25th September 1914. He was in command of the 9th Bhopal Infantry during the Battle of Neuve Chapelle on October 28th, and died the next day from wounds received at Vieille Chapelle. 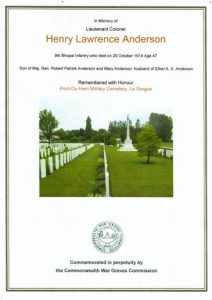