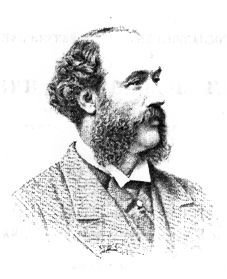 Joseph Leete was born 1831 at Royston, Hertfordshire, which had been the family home since 1768 when his great-grandfather, Robert of Eversden, settled there.  He married Harriet Whitaker in 1856.  They moved to London where Joseph took up work as a shipping agent, initially in Bermondsey and then in Harrington Road, Norwood.  They had five children between 1859 and 1969.  During the 1880s as Joseph progressed in his career and became a merchant dealing with France they moved into 18 Lancaster Road before 1881 and named it after the family’s ancestral home village of Eversden, Cambridgeshire.

Leete was an archetypal Victorian, a self made merchant who had grown rich on the export of English goods to France in the wake of Cobden’s Commercial Treaty which had reduced tariffs and eased friction between the two countries.  Joseph was awarded The Chevalier de la Legion de Honneur by the French Government in 1881. This is the highest civil award of merit: Chevalier (Knight): for a minimum 20 years of public service or 25 years of professional activity with “eminent merits”.  By 1891 he employed 19 clerks and travellers.

Like many Victorians, Joseph was obsessed with his own self-importance and with the paid aid of Charles Bridger and John Corbet Anderson had published his “own” history of the family Leete in 1881 family genealogy and lineage.   This obsession enabled William Urmstone Searle Glanville Richards to extract sums of money from Leete in trick him into believing fake information about his family.  In order to achieve this deception Richards wrote to Leete offering to carry out research for him suggesting there was a link with a family of high standing.  Leete supplied sums of money amounting to £2,500 at today’s value and in return Richards produced evidence of the link.

However in 1891 Richards appeared at the Old Bailey (t18910309-276, 1891), charged with “Unlawfully damaging manuscripts belonging to the British Museum”.  Richards was accused of adding false information to certain manuscripts and even inserting whole fake pages!  Edward Scott & others, including a handwriting expert and John Corbet Anderson stated that it was Richard’s handwriting that appeared on the manuscripts with no attempt to disguise it.  In his defence Richards said that he had added this false information in order to “help” Leete and not for any financial gain, the money paid him was purely for expenses.  He was found guilty and sentenced to a mere two months imprisonment, without hard Labour.  On his release Richards moved to Plymouth but continued to “assist” others in researching their family histories.

His son Warren, born 1862, who lived at Rosedene, 6, Howden Road, a member of the Company of Grocers, was awarded the Freedom of the City of London in 1888 by order of the Lord Mayor. Warren died in Milan, Italy at the age of 43, July 1898 from pneumonia and exhaustion.  (Death certificate).  He was buried in the family grave in Shirley.

Joseph’s wife Harriet died in 1899 and Joseph died less than a month after his son Arthur in 1913.

The Leete family moved out of Eversden after Joseph’s death in 1913 and its subsequent owner, Miss Palmer, auctioned the house and contents in 1915 as she was moving abroad.

All members of the family of Joseph Leete are interred in the family grave in St John the Evangelist church yard, Shirley.