Flight Officer John Shirley Bunbury was reported missing while flying a Lancaster on a mission with No. 50 Squadron. The operation flew from RAF Swinderbury, Lincoolshire on 17th August with 139 aircraft to bomb Osnabruck. The Lancaster was possibly shot down off the Dutch coast, although some reports suggest it was shot down by Obit. Herbert Lutje west of Emlichheim. 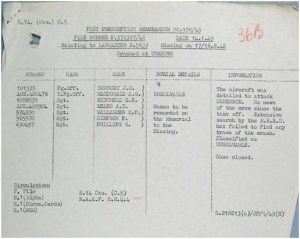