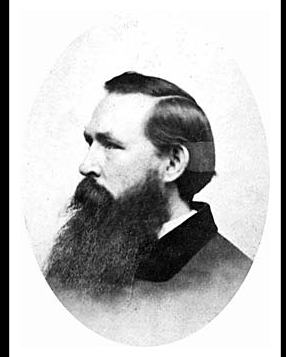 Harrison Bird Brown was recognised for his nineteenth century marine and landscape painting. An orphan at an early age he was apprenticed to a house and ship painting firm.  He opened a business as a “sign and fancy painter”.  He was encouraged by Portland’s art critic, John Neal, to produce landscapes and portraits as a sideline inititally.  His painting focused on the depiction of nature and he was first listed in the Portland Reference Book in 1858 as a landscape painter.  Between 1858 and 1860 his pictures were shown at the National Academy of Design in New York.  As his career became established he acquired a number of pupils.  He depended on the sale of his paintings for an income to support the high standard of living his family expected.  His best work dates from the 1860’s and 1870’s. In 1892 Brown moved with his family from Portland to Vermont Road, Upper Norwood in England where he died in 1915.  He was the father-in-law of Joe Seaverns, another resident of Vermont Road.