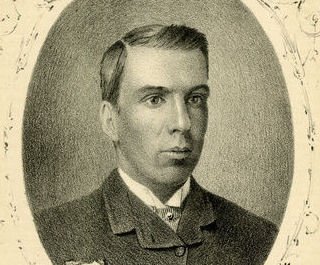 George Lacy Hillier lived at ‘Ellison’ 16 Cintra Park.  He was an English racing cyclist, a pioneer of British cycling, and an excellent all-around athlete. He was one of the founders of the Chichester and District Motorcycle Club and served as its president. He was a member of other sports clubs and was racing secretary of the London County Cycling and Athletic Club.  In 1891, he initiated the construction of the Herne Hill Velodrome, which was briefly the home of the Crystal Palace Football Club during WWI.

His father was from Bloomsbury and a member of the Stock Exchange, his mother was from Bognor Regis. He was a sickly child and he was sent away to school, as the 1871 census had him at the Temple School in Brighton, perhaps to get the ‘air’.

In 1881, he was back living with his parents who were residing in Anerley Park, just by the Crystal Palace Park.  He was already a member of the Stock Exchange.

George Lacy Hillier was also a good swimmer, competed at cross-country for South London Harriers, and he race-walked for the London Athletic Club.

He had competed in the 50-mile Championships in 1880, but there was no mention of him.  There were some glimpses on what was to come in the autumn of 1880, he won a mile handicap race at Crystal Palace and was placed second in a tryicycle race from Finchley to Hitchin and back against some of the leading amateurs of the day.  In early season races in Leicester at the Kennington Oval in front of 4,000 spectators and at Alexandra Palace, he was winning races comfortably at a variety of distances.

In addition to being a multi-distance champion in 1881, he was a member of the Racing Committee of the National Cyclists Union, he was the editor of Bicycling News for which he wrote ‘acerbic and verbose articles’.  He promoted and judged race meetings and a was a ’tireless and outspoken critic of those whom he disagreed, which was almost everyone.’ 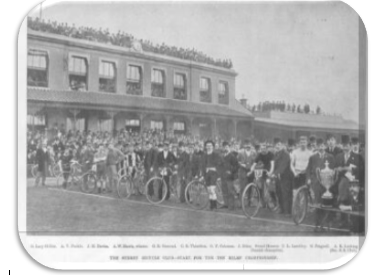 The Surrey Bicycle Club – Start for the Ten Miles Championship

In 1881 Hillier was a national cycling champion over various distances. In 1885 he travelled to Leipzig, won a ten kilometre race against the German champion John Pundt, and set a new record on the track.  For a prize, Hillier received a tape with a silver-plated cutlery and a medal.

He was frequently reported in the 1880s and 1890s press reports as an official and timekeeper; he also wrote a massive Handbook of Cycling, which one of the reviews suggested that while ‘the quantity is great, the quality does not equal it.’ As a wealthy member of the Stock Exchange throughout his riding career, he was passionate about the amateur spirit of the sport, at one point wanting those who earned their living as delivery cyclists classed as professionals.

In 1891, he initiated the construction of the Herne Hill Velodrome.

Before the Velodrome was founded, the leading venue had been at nearby Crystal Palace. Crystal Palace, however, had no banking and a poor surface and supporters favoured a track which opened north of the Thames in Paddington in 1888. Hillier had been a leading light at Crystal Palace and tried to persuade the owners, the Crystal Palace Company, to win back the supporters and racers by redesigning the track. The company declined and Hillier looked for a new site south of the Thames. He found an area off Burbage Road in Herne Hill and leased it from Dulwich College Trustees.

Work on the new track was undertaken by W & J Peacock, a building company sympathetic to cycling. It started in September 1890 and finished, ahead of schedule, in March 1891. The first race, open only to members of the Herne Hill club, was on 16 April 1891. The first open meeting was on 23 May that same year.

The circuit was designed with 5ft bankings which were later raised. The original surface was red shale, which needed repeated rolling. It was replaced in 1893 by wooden slats, which led to fast racing but frequent crashes after rain. Concrete was laid instead in 1896.

Many records were beaten on the track, which reached a peak of popularity with the Cuca Cup 24-hour races at the end of the 19th century. 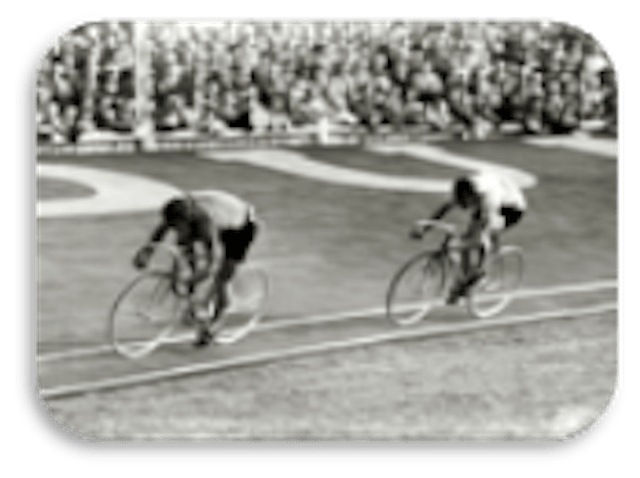 The National Cyclists Union leased Herne Hill for 21 years from 25 March 1942.  It had been damaged during the WW2 when the site was used for a gun battery.

The Herne Hill track was originally of crushed red stone that gave a fast hard racing surface.  After just two years a decision was made to change the surface to pitch pine planks, which would be lifted and stored away in the winter.  The planks were 25 feet long, one and a half inches wide and one inch thick. Every section of the track was made to measure by Peacock Bros. of Brixton. The gaps between the battens were filled with a cement grout. The new track was 502.85 yards long, meaning three and a half laps to the mile. 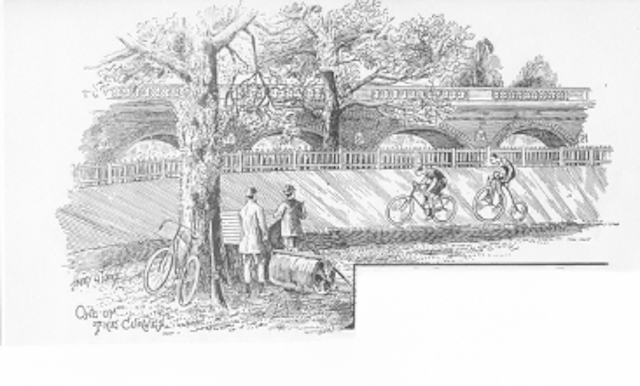 In May 1893 Hillier led a party of 27 members of the London County Cycling and Athletic club to Belgium, visiting Ghent and the opening of a new track in Brussels. The report of the trip describes Hillier as a”human encyclopaedia.” Who “knows all places of interest, has ancient history pat, speaks French like a Frenchman and is very popular on the continent”. 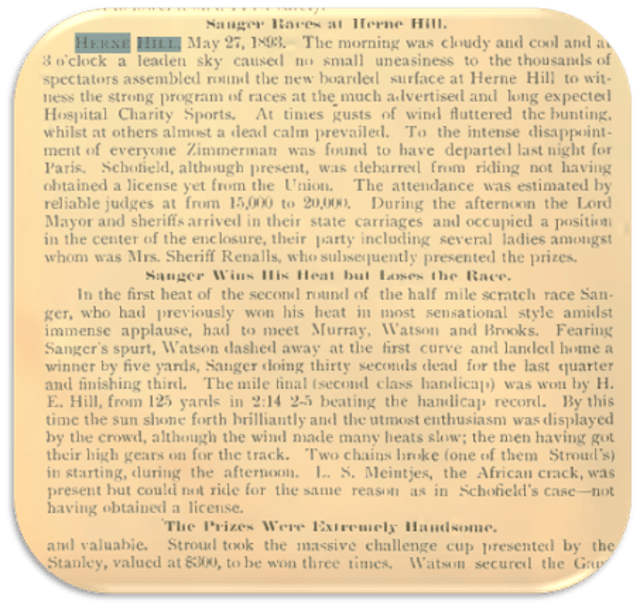 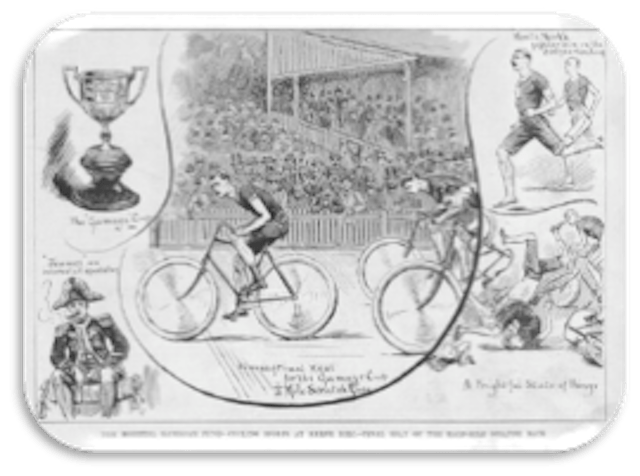 In 1897, George Lacy Hillier was prosecuted for riding a bike ‘furiously’ at 12 to 14 mph along College Road, Dulwich

AT LAMBETH, George Lacy Hillier, of Cintra Park, Upper Norwood, was summoned by the police for riding a bicycle furiously.  Mr John Othen, jun., defended.  Police Constable 20SP alleged that he saw the defendant riding a bicycle along College Road, Dulwich, at the rate of from 12 to 14 miles an hour.  Mr Othen said his client, who was a stockbroker in the City, had been a cyclist for 22 years and had never had an accident or been summoned by the police prior to this.  The defendant estimated that he was not going more than eight or ten miles an hour.  Mr Hopkins ordered the defendant to pay a fine of 10s and costs.

FINAL HEAT : Hillier, 1; Liles, 2.  Hillier was the best off and led by about three yards at the first hundred.  This lead was maintained by Hillier during the second lap, both seeming to ride easily.  Directly as the last quarter-mile was entered upon, both made their effort together and a terrace race ensured.  Hillier went the fastest and landed home about seven yards in front of Liles after a really splendid contest.  Times : First lap 55 2.5th secs., half mile 1 min.  46 3.5th secs., three-quarters 2 mins.  34 4.5th secs., one mile 3 mins.  1 3.5th secs.  The last lap was the quickest on record, having been run in 36 4.5th secs. 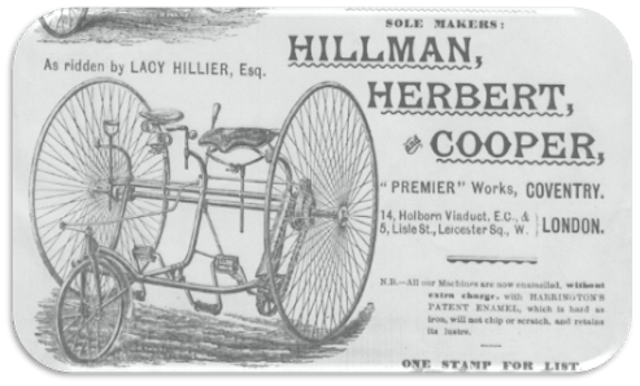 TWENTY-FIVE MILES CHAMPIONSHIP – G L Hillier, Stanley, 1st; C Crute, Sutton, 2nd; C E Liles Temple, 3rd; T D Smith, Edgbaston, 4th; S Kemp, Pickwick, 5th, J F Griffiths, Surrey, 6th’ F A Bennett, Speedwell, O; C D Vesey, Surrey , 0.  In the first lap Vesey led, with Hillier second and passing the post the first time the order was as follows: – Vessey, Hillier, Griffiths, Crute, Bennett, Liles, Smith and Kemp.  At the end of the first mile, Bennett was leading, but all were close up.  At the conclusion of the second mile Bennett and Hillier ran side by side, but at two and a half miles Liles and Hillier were the pace makers and Bennett and Vesey their immediate followers.  When about four and a half miles had been accomplished Vesey gave up and the pace was faster for a short distance, Hillier, Kemp and Bennett being alternately the leaders.  At the commencement of the sixth mile, Hillier took the field along at a fair pace.  During the seventh mile the seven riders kept together with Griffiths, Surrey, taking matters easy into the rear.  During the ninth mile Smith went to the front, but the lead was quickly wrestled from him by Liles and Hillier.  At this part of the race, Bennett spurted to the front and improved the going, but still the whole of the riders kept together.  At the tenth mile Bennett was leading, running close to Hillier, and Griffiths was still last man.  Half distance time – 43 mins, 32 1.5 secs.  In the fifteenth mile Crute made a dash to front and the whole of the riders answered with a spurt.  Crute did not hold the lead for a great deal over a lap before Hillier again led, and was in turn passed by Bennett.  In one hour the distance travelled was 17 miles 230 yards.  At the 21st mile Hillier again went to the front, being closely attended – Griffiths still last.  During the 22nd, 23rd and 24th miles very little difference occurred in the order of running.  Hillier when the last mile was begun was going at a good pace and held the lead, with Liles, two yards behind, next.  In the last lap but one Griffiths fell a long way in the rear, and Hillier who had put on a magnificent spurt, continued to gain and literally ran away from the other riders, winning by 20 yards; six yard divided second and third; four yards third and fourth; and a similar distance fourth and fifth. 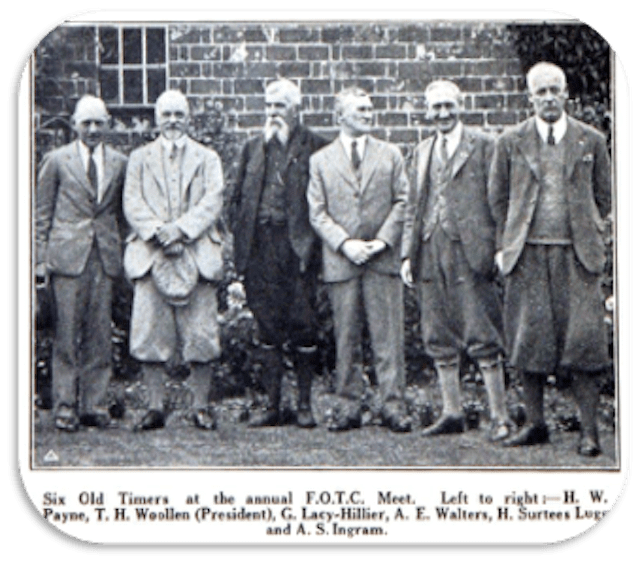 George Lacy Hillier’s Obituary in The Times also lists him as writing two novels ‘The Potterers Club’, a now out of print cycling novel, which he launched at the 1900 Cycle Show. The other was ‘The Weston Diamond’ about which little is known.  Despite having moved to Chichester in his latter years, he is buried in the family grave close to the north-eastern corner of Brockley and Ladywell Cemetery.