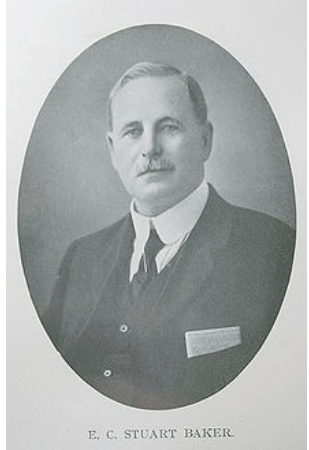 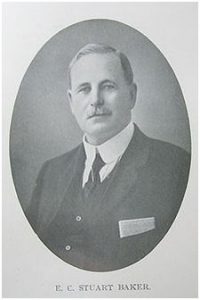 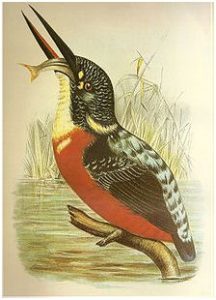 Edward Stuart Baker was a British ornithologist and police officer. He was educated at Trinity College, Stratford-upon-Avon and in 1883 joined the Indian Police Service. He spent most of his career in India, in the Assam Police, rising to the rank of Inspector -General. In 1911 he returned to England and took up the appointment of Chief Police Officer of the Port of London Police, where he remained until he retired in 1925. He appears to be living at 6 Harold Road in 1913. In 1920 he received and OBE in the civilian war honours. After his retirement he became Mayor of Croydon.

Whilst in India, he lost his left arm to a panther, was tossed by a gaur and trampled by a rhinoceros during hunting expeditions.

During his spare time he studied and collected the birds of India. His books included The Indian Ducks and their Allies (1908), Game Birds of India and Ceylon (1921, The Fauna of British India, Including Ceylon and Burma. Birds. (1922; eight volumes ), Mishmi Man-eater (1928), The Nidification of the Birds of the Indian Empire (1932), and Cuckoo Problems (1942). He made a comprehensive collection of nearly 50,000 Indian birds’ eggs, part of which he donated to the Natural History Museum.

“…. one of the personalities of a generation, whose calm demeanour both of speech and manner, had been typically British in the stress of the days. ….. born in 1864, he entered the Indian Police in 1883… and became Deputy Inspector General, CID. Out there he devoted himself to natural history and big game hunting…. His (book) Mishi the Man-eater,.. records his dangerous stalking for months of one of the most formidable tigers, which had been responsible for scores of deaths. The empty left sleeve, which he wore like Nelson pinned across his broad erect figure, reminded those who knew of a day when he came to the rescue, at a wayside station, of a village terrorized by a leopard. Attended by his bearer he tackled the enemy alone. Within a few yards of it, he shot at the animal as it charged, and for some reason his usually deadly rifle jammed. He had no time to correct matters or seize another rifle before the leopard reached him; he held its’ fangs off with his left arm until his bearer reached him and was able to shoot it through the head from the closest quarters. His arm was terribly mauled. Adequate treatment was impossible and he knew he might be dead from blood poisoning within a few hours. His stoical courage can be estimated from the fact that he determined to have it removed from the shoulder and himself instructed the simple local surgeon both to do it and how to do it. On retirement from India in 1912, he was appointed to re-organize the Port of London Police and commanded it until his retirement in 1925. He then returned to local government work, and in that year he was elected to the Town Council, served on many committees and was chairman of several, becoming Mayor (of Croydon) in 1938 and was to become an alderman in 1940.”

Croydon and the Second World War

Published by The Croydon Corporation