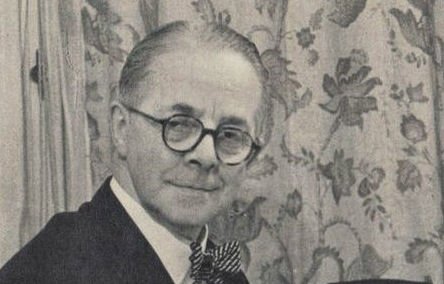 The Grange, Grange Hill was bought by William Russell Chapman in 1932.  William was born 18 July 1884 in Croydon, Surrey.  His parents were William and Alice Chapman who lived at 12 Old Palace Road, Croydon Surrey.  William senior was recorded in the 1891 census as a plumber but his son did not follow him into plumbing but became a draper’s assistant.  At some point William gained employment at Arding and Hobbs department store in Clapham, south west London.

William married Nellie Pryer in 1909; she was then living at 99 Albert Road, Croydon and working in Croydon also a draper’s assistant.  They had three children; Lillian Hazel, 1909; John, 1911 and Valerie, 1918.  Although known by everyone as John in official documents his name is recorded as Leonard Jack Russell.

Lillian was a dancer in the Corps de Ballet appearing in Swan-Lake, and musicals including, Rosemarie, The Three Musketeers, The Bluebird, and the Desert Song which opened in Paris in 1930 as La Chanson du Desert.  Lillian ran the Grange School of dancing, William having knocked down a wall or two to create a large room suitable for dancing. 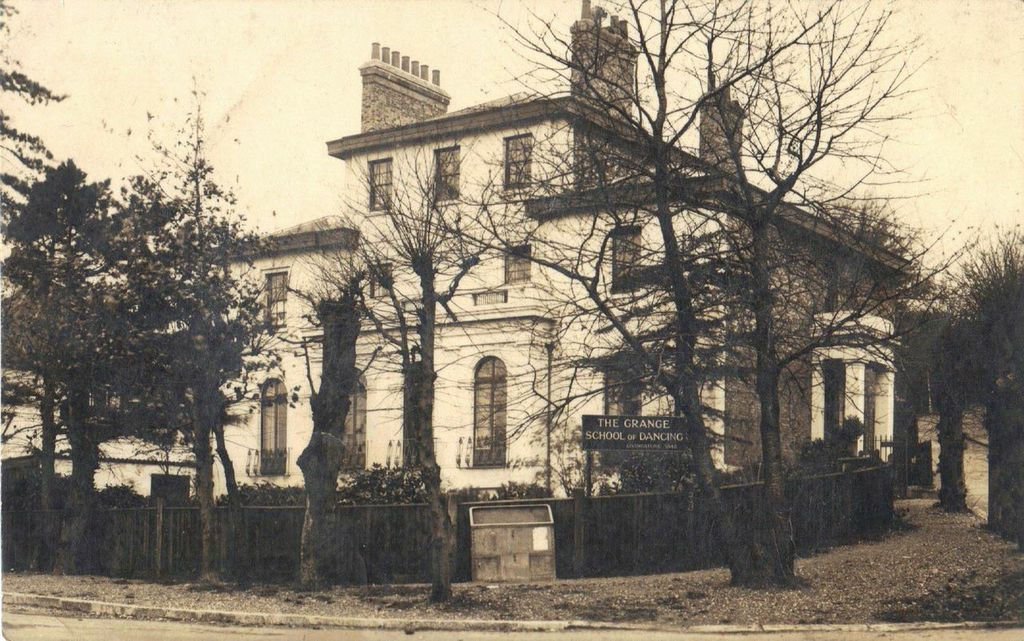 The Grange with advertising board as ‘The Grange School of Dancing’, c 1935. Courtesy R Jones.

The School’s pianist suffered from considerable flatulence which was heralded by the piano keys being hit with some considerable force in the vain hope that no one would hear anything untoward! 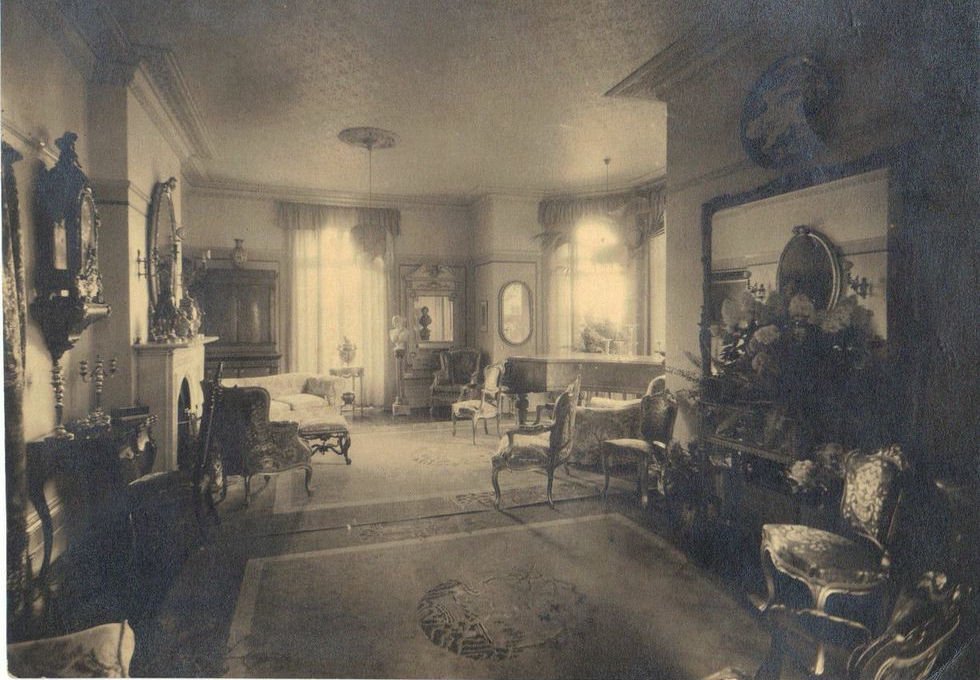 The large first floor lounge, which at some point was used for the dancing school, complete with piano. Courtesy R Jones.

When Lillian married in 1935 Valerie took over the running of the Dance School and favourable reports about its annual display appeared in the local press with their brother John on one occasion.  Lillian married Alfred Leslie Jones of A B Jones and Sons of the Royal Grafton China factory, Longton, Stoke-on-Trent, 18 July 1935 in All Saints Church less than a hundred yards away from the family home.

Family tradition has it that an orang-utan or possibly a large monkey had escaped from a nearby house having badly injured a maid entered the grounds of the Grange.  During WW2 Lillian and Valerie worked at the War Office, whilst their brother John was badly wounded during operations at Dunkirk.  After being evacuated from France he recovered from his wounds and held the title of ‘DADOS’, Deputy Assistant Director of Ordnance Services based near Edinburgh, Scotland.  William’s sister-in-law, Lily, moved into the Grange and had the disconcerting habit of opening sash window on the top floor during air raids, sitting on the sill and watching bombs drop.  Several landed nearby at the junction of Grange Hill and Grange Road with on one occasion one exploding nearby sending a shockwave through the house. 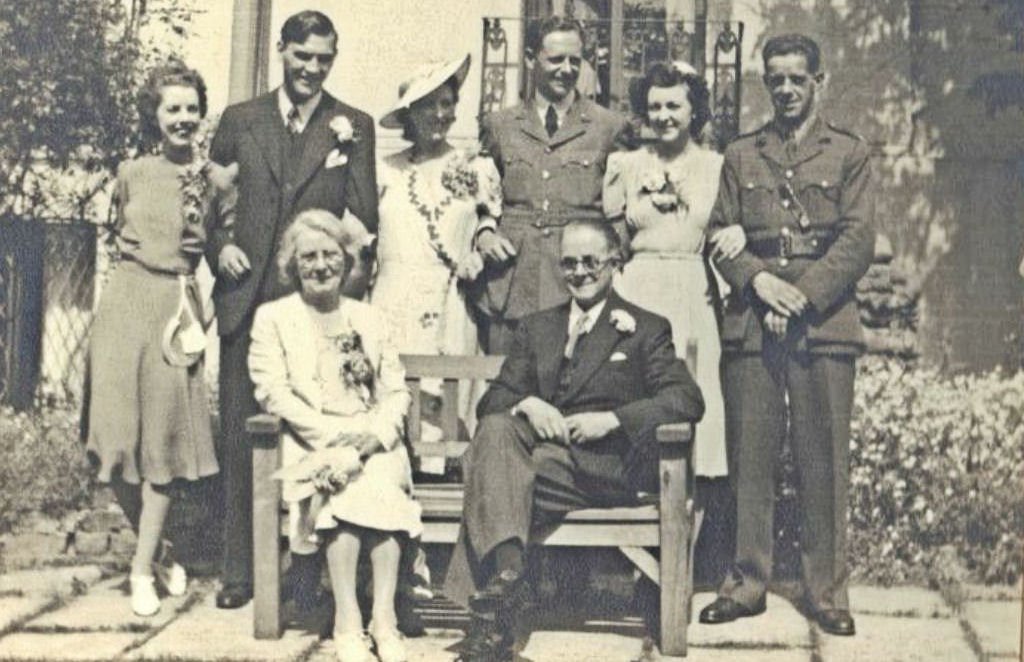 After the war William had become ‘Company Director’ at Arding and Hobbs. The Masons often held events at Arding and Hobbs and as a Mason William would have been in attendance and he often used to sleep over when functions finished late.  Unfortunately on one such occasion he hit his head on a marble shelf in a bathroom fracturing his skull.  He was hospitalised at nearby Bolingbrook Hospital and died a few days later of a subarachnoid haemorrhage, 11 December 1947.  A subarachnoid haemorrhage is an uncommon type of stroke caused by bleeding on the surface of the brain; it’s a very serious condition and is often fatal.  It must have been a particularly sombre Christmas that year at the Grange! William left his entire estate, £18,037, to his son John. (Jones, February ).

Nellie had died a couple of years before William and the remaining members of the Chapman family sold up moved out and the Grange was put up for sale.  By 1955 it had been subdivided into six flats, the occupants at that time were: