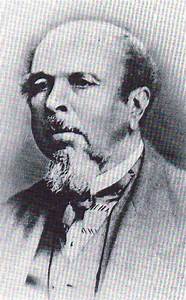 Resident in Palace Square on the 1861 Census, was John Bagshaw MP.  He was a Property Developer, Whig and Politician and a Magistrate for Essex (1851 Census).

He was born in Warwickshire in 1784, but moved to Harwich, Essex and acquired land at nearby Dovercourt, where he developed plans with the help of W.H. Lindsey, a London Architect, to build a new resort overlooking the sea. He started the project in 1845 by building a mansion, Cliff House, for himself and his family and actively promoted a railway link to Harwich.  When a chalybeate spring (Chalybeate waters, are mineral spring waters containing salts of iron) was discovered in the grounds of Cliff House, Bagshaw extended the property to incorporate a spa, library, pump room, and conservatory. He next developed Orwell Terrace where his son Robert John Bagshaw, also an MP for Harwich, moved into Banksea House in 1857.  The developments, which included Marine Parade and the Cliff Estate, caused him financial difficulties and he was declared bankrupt in 1859.

He was elected in the 1835 General Election as a Member of Parliament for Sudbury, having unsuccessfully contested the seat at a by-election in July 1834.  At the 1837 General Election, he did not stand again in Sudbury, but contested Kidderminster unsuccessfully.  At the1841 General Election he stood instead in Harwich, but was not elected.  He won the seat in 1847, but was defeated in 1852.  The election of his Conservative Party successor was voided on petition and Bagshaw won the resulting by-election on 21 June 1853.  After being re-elected in 1857, he resigned his seat in the House of Commons on 9 March 1859, through appointment as steward of the Chiltern Hundreds.

He died in Norwood in 1861, aged 77, after the contents of his house and spa had been sold and his estate broken up.  Cliff House was demolished in 1909 and the Spa in 1920.  He had married twice and had a son and three daughters.  His son John Robert continued the development of Dovercourt and also became MP for Harwich.