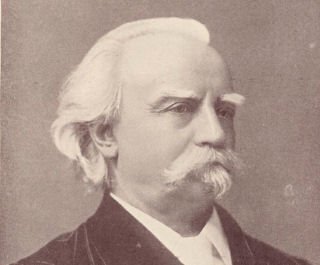 As Musical Director of the Crystal Palace from 1855 to 1901, August Manns made two very important contributions to English music. The Dictionary of National Biography describes him as ‘unrivalled in England as an orchestral conductor’ and an article in The Musical Times (1st March 1898) explains this:

‘The orchestral conductor plays an important part in modern musical life… but it should not be forgotten that the permanent introduction into England of even the baton itself, as a time-beating stick, is within living memory. When Spohr temporarily used it in 1820, the gentlemen of the orchestra revolted (the author said ‘misconducted’ themselves). It was not until 1832 that conductors began to use the baton… It might be supposed that the modern orchestral conductor (in England) began with Hans Richter when he conducted his first orchestral concert in1879. But for nearly a quarter of a century previously there had been working at the Crystal Palace a conductor who has had a great influence upon orchestral music in England. For more than forty-two years Mr Manns has zealously discharged his conducting duties with singular ability.’

This article credits Manns with establishing the role of the orchestral conductor in English music. His other major contribution was to introduce the works of Schumann, Brahms, Dvorak, Schubert, Sir Arthur Sullivan and many others to sometimes sceptical English audiences.

On 10th June 1854 Queen Victoria opened the rebuilt Crystal Palace on Sydenham Hill. Earlier that year Henry Schallehn, a German ex-military bandmaster, was appointed Musical Director and charged with forming a brass band to entertain visitors to the Crystal Palace. On 1st May 1854 Schallehn appointed August Manns as assistant-conductor and clarinettist. The band, with Manns playing clarinet, gave its first public performance at the opening ceremony in front of the Queen.

The next major event at the Palace was a Grand Fete, to raise money to aid the widows and orphans of the troops fighting in the Crimea. Schallehn wanted something special for the orchestra to play, and asked Manns to compose it. Manns was happy to do this and devoted much time and effort to it. When shown the proofs Manns realized that not only did Schallehn claim that he composed the music but he also received £50 for it. Manns challenged this. He didn’t mind Schallehn being credited but surely, as the actual composer, he should have received some payment. Manns also pointed out that while Schallehn was paid £600 a year, he only received £156. Schallehn claimed he was the ‘proprietor’ of anything that his assistant might compose and that attaching ‘Schallehn’ to a piece of music would sell it better than ‘Manns’. He offered Manns £1 for his efforts; Manns refused this, and was dismissed.

Matters did not rest there. Manns wrote to ‘The Musical World’, appealing to the English for justice, ‘which I am denied by a countryman of my own’. The editor of the periodical vigorously took up Manns’ cause, claiming that ‘every Englishman will burn with indignation at such an industice’ and demanding that Manns be reinstated and Schallehn dismissed. Within a year that is what happed. Largely through the influence of the Secretary of the Crystal Palace, Sir George Grove, Schallehn was dismissed and on 14th October 1855 Manns was appointed conductor and musical director.

August Manns grew up in a family that cared about music. He was born on 12th March 1825 in Stolzenburg, Pomerania, Prussia. Stolzenburg is now Biskupia Gorka, part of the city of Gdansk, on the Baltic coast of Poland. August was the fifth of ten children of Gottfried Manns, foreman at a local glass factory. When Gottfried returned from work he would take his fiddle from the wall and ‘make music to his children’. His children, self-taught, would join in with violoncello, horn and flute.

Manns married for the first time in 1850. We know little about his life at this time and less about his wife, although he told a friend that within a year she died ‘in great pain in bitterly cold weather’.

On 30th July 1857 August married a second time, to Sarah Ann Williams. The wedding took place in St Pancras Old Church. While Manns’ address was given simply as ‘St Pancras’, Sarah’s father (Frederick, a tobacco broker) was living at Norwood. Soon after their marriage August and Sarah moved to 12 Eden Villas (now 136 Knights Hill), West Norwood where their only child, Augusta Kate Frederica, was born on 18th October 1858.

August and his family moved several times, mostly keeping close to the Crystal Palace. By 1864 they were at Athol Lodge, 174 Kirkdale, Sydenham. They were still there in March 1871 but, according to one source, in 1872 they were living in Balham High Road, near the station. Apparently, even then, this was ‘an inconvenient train service to the Crystal Palace. By 1880 the family were at Larkbeare, 4 Dulwich Wood Park, where they stayed until about 1889.

After a brief sojourn at 56 Central Hill in 1891 August and family finally settled at Gleadale, 4 Harold Road, Upper Norwood. It was here that August was widowed for the second time, when Sarah died on 7th January 1893. On 7th January 1897, the 4th anniversary of Sarah’s death, August married Katherine Emily Wilhemina Thellusson, great-grand daughter of the 1st Baron Rendlesham.

In 1903, August was both knighted and made an honorary Doctor of Music in recognition of his service to music.

In Summer 1906, in failing health, Sir August and Lady Manns made a final move to White Lodge, Biggin Hill at the junction with Beulah Hill. It was here, on 1st March 1907, that Sir August Manns died. He was buried in West Norwood cemetery on 6th March. Lady Manns continued living at White Lodge until her own death on 25th February 1921.

Two years after Manns’ death the first biography appeared, written by a personal friend and music writer. The author ended by saying that in England Manns was survived by a nephew, son of his youngest brother Otto, and a grandchild so ‘his stock was not likely to die out soon’ in this country. The grandchild, Louisa Bonten, died unmarried in Hastings in 1984 while the nephew had one child, a son called Frederick, who died aged 15 when he fell under a passing train. Sadly, August’s ‘stock’ does not seem to have survived in England.

Yet we do have a tangible link with August Manns, apart from his musical legacy, as two of the houses he lived in still survive: 12 Eden Villas, 135 Knights Hill where he lived from 1858 until about 1861 and Athol Lodge, 174 Kirkdale, Sydenham, his home from about 1864 until 1871.

Manns’ house in Kirkdale was a short distance from St Bartholomew’s church. His close friend and staunch supporter, Sir George Grove, spent his early years in Sydenham even closer to the church. From 1862 he was at 14 Westwood Hill (actually next to the church until the Shackletons’ house was built between them in the early 1870s) until he moved to Lower Sydenham in 1860. Although there is no evidence that Manns was involved with the church Grove certainly attended regularly and was a close friend of several of the vicars and curates. The occasion when, in 1875, Dean Stanley came to St Bartholomew’s to preach gave Grove one of his most cherished moments at the church.

In 1893 Dr Frederick Shinn, a recent graduate from the Royal College of Music, was appointed organist and choirmaster of St Bartholomew’s, a post he held until just before his death in 1950. Shortly after this appointment Dr Shinn was invited to work closely with August Manns to produce two booklets: A Catalogue of the Principal Instrumental and Choral Works performed at the Saturday Concerts (1855-1895) and Forty seasons of Saturday concerts at the Crystal Palace: a retrospect and an appeal (Crystal Palace Company, 1896). There is a memorial to Dr Shinn near the organ in St Bartholomew’s.

In a speech to celebrate Manns’ 70th birthday in 1895 Sir George Grove paid tribute to his close friend and colleague:

‘We have to express our gratitude for your efforts at the head of the Crystal Palace orchestra by which the works of many of the great composers have been introduced to England, in a manner well worthy of the fame of those great men. No Englishman could have given more encouragement to our native school than you have given by your cordial behaviour to our composers and performers, by the extraordinary pains you have bestowed upon their works, and the careful and brilliant performances by which you have introduced them to the public. As your first friend in this country, I may be permitted to acknowledge the honour and gratification which I have felt at working by your side for many years, and the pleasure which our uninterrupted friendship has given me’

No eulogy could be more fitting for this man who had such an influence on the development of music in England.