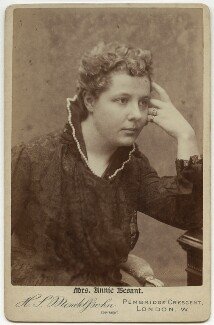 One of Colby Road’s earliest residents was Annie Besant, the 19th century social reformer. She was a remarkable woman and much of her life story is covered in ‘Who Was Who in Dulwich’. However, her reasons for settling here are intriguing. In 1872 she heard the eloquent sermons of Charles Voysey (father of CFA Voysey), who lived in Dulwich, and began to discuss with him her questioning of her Christian beliefs. Voysey, struck by the ‘unusual appearance and earnestness of this beautiful woman of twenty-five’, befriended her, inviting her to Dulwich where she often stayed with him and his wife. When she refused to attend communion, her clergyman husband ordered her to leave the family home and while divorce was unthinkable, in 1873 they legally separated; her husband had sole custody of their son while Annie had custody of their daughter, Mabel.

Through the Voyseys Besant had met Thomas Scott, a middle-class intellectual who lived in Farquhar Road, and became, like him, a free-thinker and it was to these friends in Dulwich that she looked for help after her separation. In 1874 she wrote to her mother: ‘I found a tiny house in Colby Road, Upper Norwood, near the Scotts, who were more than good to me, and arranged to take it in the spring’. She ‘hurriedly furnished a couple of rooms in the little house, that I might now take my mother into the purer air of Norwood’. Though the house was her ‘little nest’ its upkeep was almost beyond her means: ‘the little house in Colby Road taxed my slender resources heavily and the search for work was not yet successful. I do not know how I should ever have managed but for the help ever at hand, of Mr and Mrs Thomas Scott’. She had a small allowance from her husband and earned some money writing for Scott but there were often days when the money would not stretch to food for all the household, so Annie spent the day ‘studying’ at the British Museum so as to have ‘dinner in town’, said dinner being conspicuous by its absence. She sold her jewellery and her clothes and clearly considered herself to be on the verge of destitution yet curiously still kept a servant, Mary, who, Besant said, kept the little house so bright and fresh-looking that it was always a pleasure to be in it. The Scotts were assiduous in inviting her to meals at Farquhar Road and if Mrs Scott had not heard from Annie for a couple of days she would visit Colby Road to see what had happened. It was here in Colby Rd that Annie Besant found her public speaking voice: ‘tentatively I took up this keen weapon and have used it ever since’.

Her mother did not live long, dying at Colby Road, ‘worn out, ere old age touched her, by sorrow, poverty and pain’. Besant felt that the rooms of Colby Road were ‘filled with sunshine but unlighted by her presence’. She herself fell ill the following year with a ‘congestion of the lungs’ and in 1874 left Colby Rd for Bayswater.