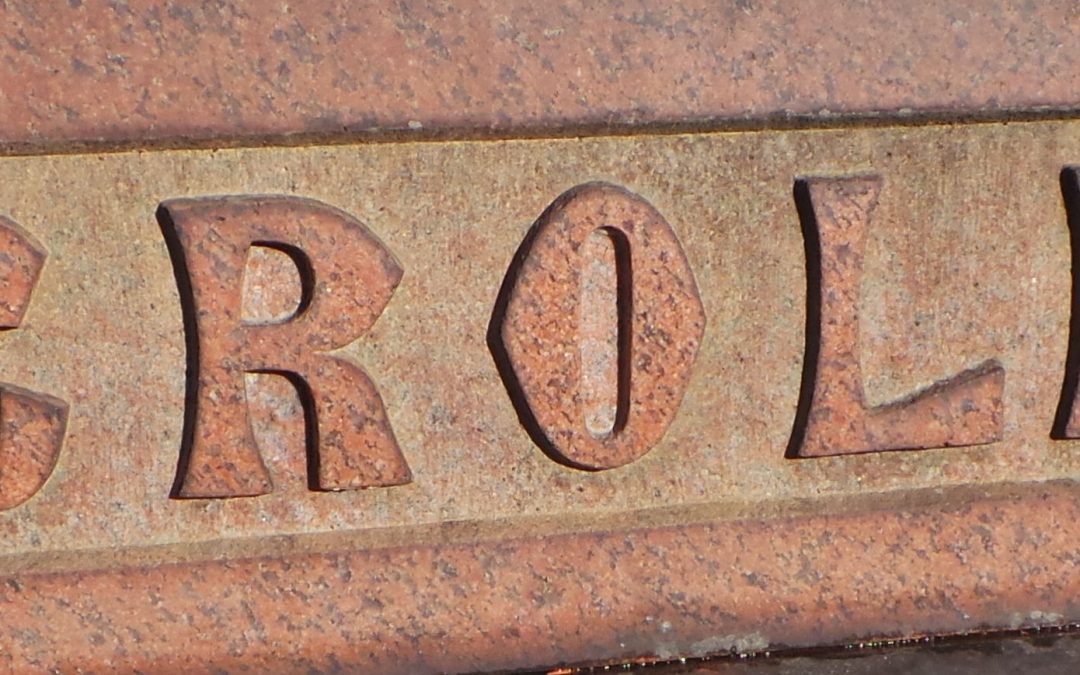 The first recorded inhabitants of Mavis Bank were Alexander and Mary Ann Croll and various relatives who lived there between 1874 and 1912 (Ward, 1874-1955). Alexander Croll, should not to be confused with Alexander Angus Croll an important British engineer and Sheriff of London, was born in Scotland in 1812.

Alexander moved to South Africa and was trading as an established merchant by 1845.  His name appears that year in a petition signed by over one hundred merchants and others resident in the Colony of the Cape of Good Hope opposing changes proposed by the Legislative Council which would affect their ability to recover debts owing to the petitioners.

He married Mary Ann Rea in Dundee 11 February 1850, when he was 38 and she 14 years his junior.  Mary Ann was born in Ireland.  By 1861 Alexander & Mary were living in Hastings, Sussex where he was earning a living as a merchant trading with South Africa, possibly importing wheat or wine from the British Cape Colony.  However he may have had some involvement in trading gold or diamonds which were being discovered there from 1860.  He probably had trading connections with Richard Townroe, father of their nephews Eugene and Lionel, who was a wealthy diamond merchant based in South Africa. Their nephew John Halson, also from Scotland, was living with them in 1861 (Census).

Between 1854 and 1859 Alexander appears on the register of the United Grand Lodge of England as a member of the Freemasons, the last three years in Port Elizabeth, South Africa. (Freemasons, 1837-1862).  He was an important member of society in Cape Town as he became a director of the Standard Bank of British South Africa (Morning post, 1862), Graham’s Town Fire and Marine Assurance Company (London Evening Standard, 1864) and the London and South African Bank. (London Evening Standard, 1864).

Whatever commodity he was trading with South Africa he appears to have been very successful at it and became very rich indeed as by the time of the 1871 census Alexander had retired, at the age of 59 and  had moved to a large semi-detached four story villa at 16 The Boltons, Kensington, South West London.  This road is now one of the ten most expensive places to live in Britain with houses changing hands today at around £13 million.

Alexander and Mary do not appear to have any children of their own but often had nephews or nieces stayed with them at the Boltons and later Mavis Bank.  John Halsons’s sister Margaret was living with them in a household of ten, five of whom were servants including a cook, a parlour maid, two housemaids and a coachman, the horses and carriage being kept in the mews to the rear of the house.  The coachman’s wife and their baby son were also resident.

They had moved to the rather less grand property, Mavis Bank, Grange Road, Upper Norwood, before 1874.  Their household had now only six other members, all servants.  By this time Alexander’s health had deteriorated as can be seen from the fact that they employed two nurses, one described in the census as a “sick nurse”.  The others were a cook and three maids of various descriptions.  Perhaps they moved to Upper Norwood to benefit from the “pure air” of the area far above the London smogs?  Alexander was present at Mavis Bank on the night of the 1881 census on 3 April but died there ten days later.  His death certificate stated that the cause of death was jaundice, which he had been suffering from for 18 months.  Today jaundice would not be considered a cause of death, merely a symptom of some more serious underlying illness such as pancreatic cancer or even cirrhosis of the liver, which is a more likely cause of death.  Alexander was buried in West Norwood cemetery, grave no. 18575, square 91.

Alexander’s will was a well thought through document amounting to £140,000; 11 million at today’s values!  He left all his possessions and property to his wife May Ann, as well as an annual income from his estate and instructions as to how it should be distributed upon her death.  His butler, Thomas Laker was left in excess of a year’s wages, with other servants smaller legacies.  Various relations also received legacies and, interestingly, forty percent was to be divided between “certain public institutions in South Africa.  (Morning Post, 1881).

Mary Ann Croll continued to live at Mavis Bank for a further 31 years after Alexander’s death until her own death in 1912. 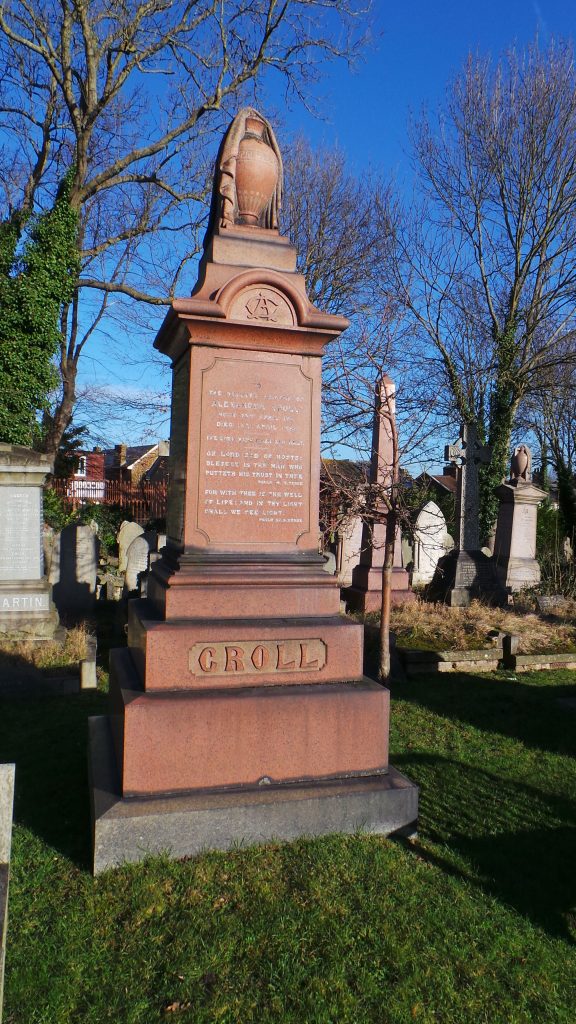 In 1901 Mary Ann had been joined at Mavis Bank by her nephew Eugene Dunbar Townroe, born in South Africa and on the night of the census a friend Lilian Challis, soon to be Eugene’s wife, was staying with them.  Mavis Bank still required a range of servants in order for it to function and so Mary Ann employed a cook and four housemaids.

By now at the grand old age of 85 Mary Ann’s health needed support and Laura Gooding a “sick nurse” was resident at Mavis Bank to attend to her every need.  There were also three maids and Henry Goodes, butler.  Mary Ann died 1 April 1812 and was buried in West Norwood Cemetery, grave 19209, square 120, a fairly grand memorial was erected above a brick-lined grave with entrance at a cost of £196 7s 0d.  Her husband’s remains were moved to join her there and the memorial records that the remains of their nephews Eugene and Lionel Edmund Townroe and Arthur John Brown are also present.

The family name of “Townroe” simply refers to a family who lived on the outskirts of a village or literally “at the towns end” and belongs to the class of topographic surnames, which were given to people who resided near physical features such as hill, streams or churches.  There are currently only about 400 people with this surname, of who over 200 are resident in England, 100 in Australia and one in South Africa. (Townroe, 2012-2017).

Eugene and Lionel Townroe were born in South Africa in 1876/1873; their father a rich diamond merchant.  Eugene was educated at Dulwich College, where he was a boarder (1891 census) and took up studies as a medical student at St George’s Hospital, Tooting 2 October 1893.  A few months later, in June 1884, aged only 18, he was appointed 2nd Lieut. In the 4th Volunteer Battalion of the East Surrey Regiment.  He was awarded the Queen Victoria medal with three clasps for service as a member of the City of London Imperial Volunteers in the Second Boer War in South Africa.  As only 26 clasps were issued during that action we may assume some acts of great courage or bravery by Eugene.  In 1900 he was awarded the Freedom of the City of London. (Medical Directories, 1930)  .

Eugene married Lilian Alice Challis in June 1903 at St Mary Abbot’s church, Kensington with three vicars contributing to the service including Rev Taylor of All Saints, Upper Norwood.  Lilian Challis, Eugene’s first wife, was born in October 1873 in Lambeth, Surrey, and her father a lowly merchant’s clerk may well have worked for Alexander Croll.  Lilian was visiting Mavis Bank at the time of the 1901 census and was recorded as a “friend” rather than the usual “visitor”. Eugene was also present that night and within two years they were married.  There were no announcements of the ceremony in the newspapers, unlike his second marriage which was granted numerous column inches when he married into a more high status family!

Lilian gave birth to their only son Ralph Dunbar barely nine months later February 1904 in Montana, Switzerland where she died probably during or shortly after childbirth.  Her death was briefly announced in the British press the following week but no details given and her death does not seem to have been registered here either.  She was buried in Switzerland in the Cimetière Anglican de Territet Montreux.   (Million graves)  It is not clear why they were in Switzerland, though it may be that they were there for her health as later in his career Eugene takes an interest in researching and treating “consumption”, (tuberculosis).

Eugene was back living with his aunt at Mavis Bank in 1905 (medical directory) and in 1907 he was recorded as being at the Limpley Stoke Sanatorium near Bath, probably as a resident surgeon.  The hospital was opened in 1905 to treat those suffering with tuberculosis and Eugene contributed to the research carried out there.  (Medical directory 1910) (Kelley 1907)  1910 sees him back at Mavis Bank (Medical directory) and in 1912 he married Helen Charlotte Elizabeth Ogston, Bsc., in an ostentatious ceremony in the King’s College Chapel, Aberdeen.  (Wedding at King’s College, 1912).

By 1915 Eugene had moved to an upmarket address at 43 Campden House Court, Kensington. (Medical Directory).  Eugene lived briefly in San Remo, Italy in the 1930s, staying at the grand Riviera Palace, Corso Imperatrice.  (Medical directory 1930)  His standing in the medical world steadily increased and by 1942 he was Medical Officer of Health, Schools Medical Officer and Police Surgeon for the City of Hereford. (Medical directory)

Eugene moved to York House, Mitcheldean, in the Forest of Dean, Gloucestershire, where he appears to have established the York House Medical Centre, which still exists in the same building.  After a long illness he died there 6 February 1951 and was cremated at nearby Cheltenham crematorium.

Lionel married Florence McCartney Miller, a merchant’s daughter at the church of St Peter, Lewisham at which time he was back living with his aunt Mary Ann at Mavis Bank. Lionel became, like his brother, an honorary Lieutenant in the Artillery Company of London and by 1904 was operating as a solicitor with offices in Chancery Lane, London.  Shortly after their marriage Lionel and Florence moved into The Grove, Church Road, Upper Norwood where they remained until his death in 18 September 1927 from cancer.  Florence remained there until at least 1934.  Florence died in December 1949 in Croydon, Surrey.

Mavis Bank-out lasted the Crolls and Townroes surviving until, as John Coulter puts it “it was scandalously demolished in 1994”. (Coulter, 1996).  It has since been replaced by the block of 18 flats called “Discovery Court”, built in the late 1990s.