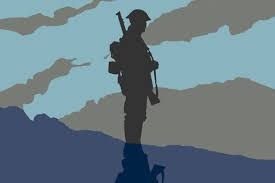 He was born 1887 in Norwood, to William (a general labourer and carman) and Sophia Tyrrell and lived at 22 Barnfield Road.  He had three brothers and two sisters.  After leaving school he became a milkman (1901, aged 15) and had moved to 67 Woodland Road with his widowed mother and older brother, Frederick and slightly younger brother, Frank.  He joined the 12th Bn. King’s Royal Rifle Corps and was Killed in Action in Flanders on 28 February 1917.