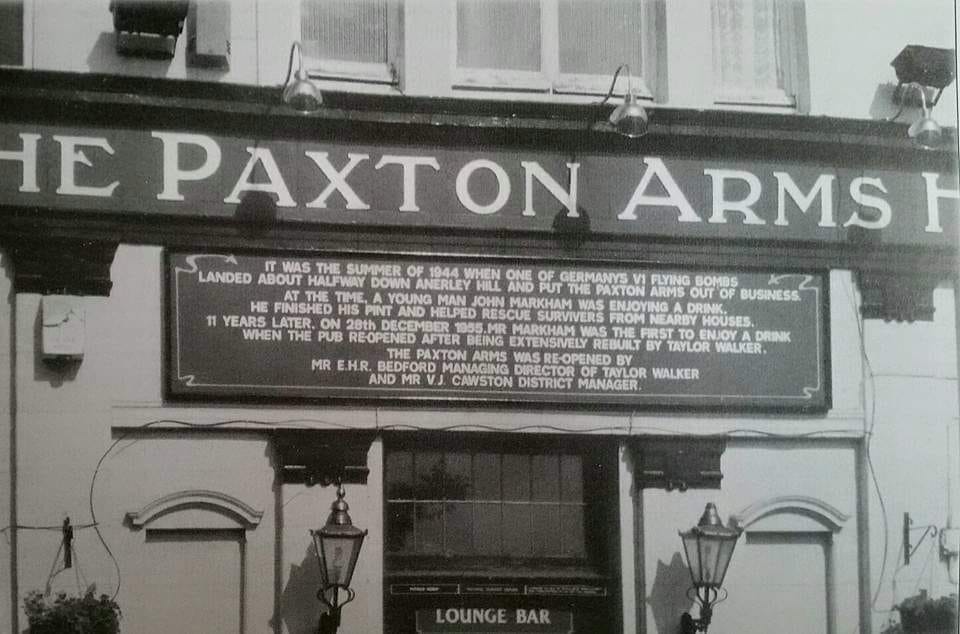 As Palace Road has been completely rebuilt since the late 1970’s, the only original building part of the road is The Paxton Arms Hotel pub, and as evidenced in newspaper articles, was in existence by 1857 and stands on the corner with Anerley Hill (No 52), opposite Crystal Palace Station Road, with stabling and a coach house at the rear in Palace Road.

This pub suffered the impact of German bombing in 1944 and didn’t reopen until 1955.  It closed as a pub in 2013 and is now the Paxton Centre Community Arts Space.

When James and Diana married on 10 April 1857, James and his father James, had been Wine Merchants.  Diana’s father William Hibberd had been a Brewer.

On the 1881 Census, is Mary A Roberts, Widow (aged 37) (Bn 1844 Somerset).  There is also a Boarder, John Conner (aged 25 from Guildford) whose occupation is an Army Sergeant.  She has a Barman, Harry Shires (aged 27 from Guildford) and a Potman, William Simmons (aged 18 from Essex).

On 21 October 1899, she was mentioned in the Norwood News regarding the 44th Anniversary of the Kennel Club at the Crystal Palace:

‘Mrs Wernham of the Paxton Arms, as a Local Exhibitor, with her Fox Terrier’. 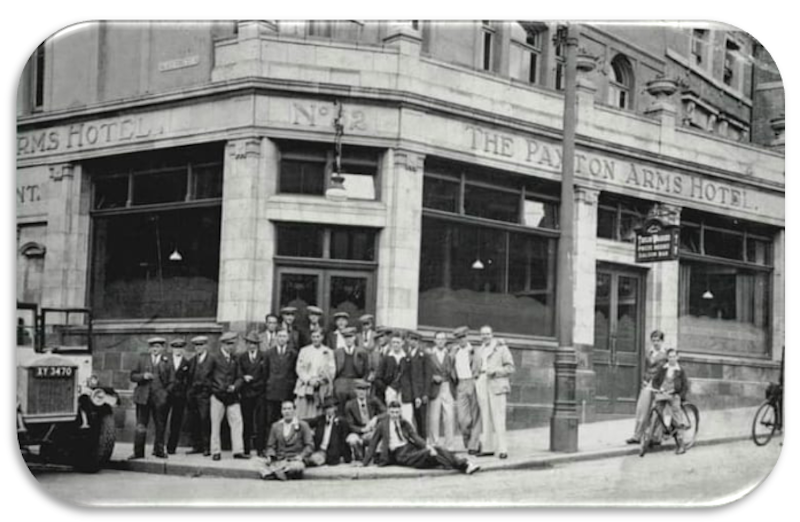 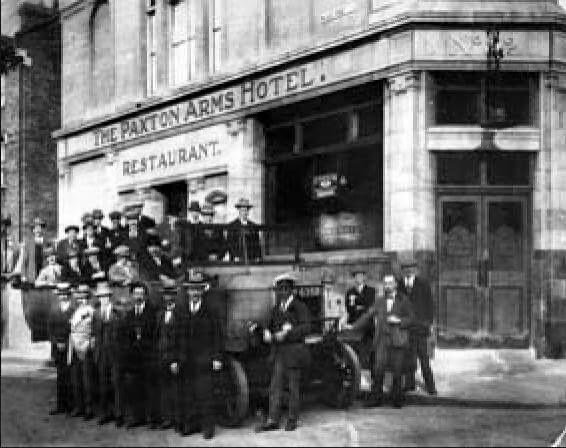 During WW2 in 1944, The Paxton Arms Hotel received bomb damage.  A large sign once displayed in the place of the corner entrance in later years, stated the heroics of a local young man:-

It was the summer of 1944 when one of Germany’s V1 flying bombs landed about halfway down Anerley Hill and put the Paxton Arms out of business.

At the time, a young man, John Markham, was enjoying a drink.  He finished his pint and helped rescue survivors from nearly houses.

Eleven years later, on 28 December 1955, Mr Markham was the first to enjoy a drink when the pub re-opened after being extensively rebuilt by Taylor Walker.

This sign has recently either been painted over, or removed which replicated the information on an earlier sign. 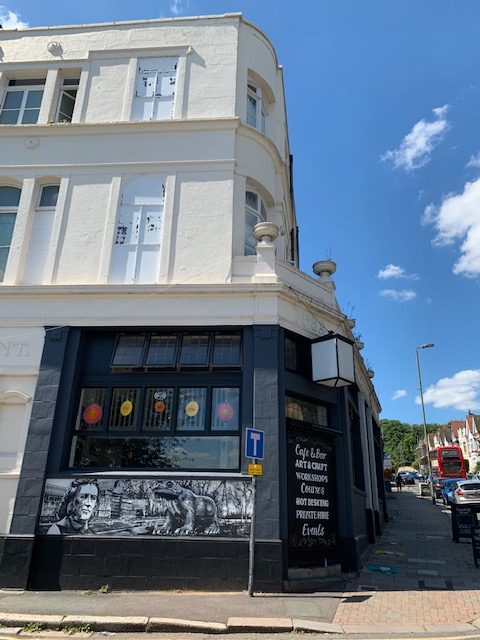 The Paxton Arms Hotel today (now the Paxton Centre, Community Arts Space),the only original building that is part of Palace Road, on the corner with Anerley Hill [courtesy of J Ray-Heard] 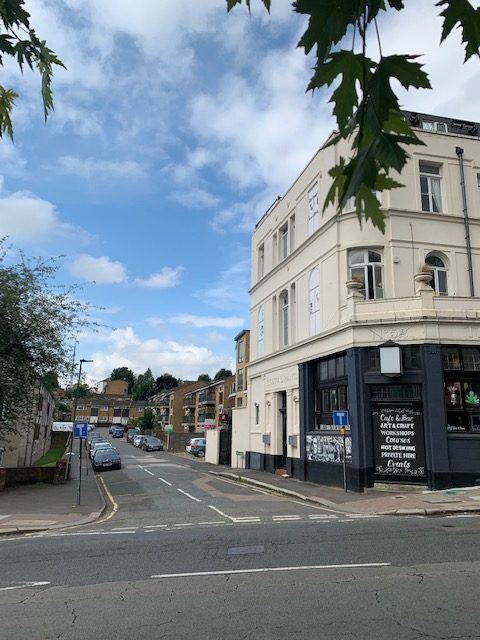 The Paxton Arms Hotel on the corner of Palace Road and Anerley Hill 2021 The gap between The Paxton Arms and the new-build behind, once housed the stabling [courtesy of J Ray-Heard]

Advertisements from the Norwood News for the Paxton Arms

and Paxton Arms, Anerley will, as usual,

at the back, to those who do not enter the enclosure.

A list of prices will be fixed in every part of the establishment.  J.C has no connection with the booths on the embankment and will be happy to see his friends at Brighton Grandstand on the 4 August.

CRYSTAL PALACE – Excursionists and Visitors will find the PAXTON ARMS HOTEL, Anerley, immediately opposite the station and platform.

Cold Luncheons in great variety.  Wines, Spirits, Ales, Stout, &c., of the very best quality at moderate prices.  Visitors before entering, or leaving the Palace will find this a great saving and accommodation – JAMES CARELESS, Proprietor

Opposite the Crystal Palace Station

Has the best BILLIARD TABLE and the largest and best appointed BILLIARD ROOM in the neighbourhood.  The marker (late of the Crystal Palace Billiard Room),

solicits the patronage of his former customers.

The late lamented accident in the Billiard Room, at the Paxton Arms,

opposite the Crystal Palace Station, by which a well-known gentleman lost his life.

It appears, from enquiries made of the marker, that a party of gentlemen had been playing a game of Pool on that splendid table, by Thurston, with various success,when Mr Simkin and Mr Brown were left with one life each,and by a clumsy stroke Mr Simkins made a slip with his cue,so losing his life by an accident.

situate at the corner of ANERLEY ROAD AND PALACE ROAD, UPPER NORWOOD

With stabling and coach house in the rear and directly opposite the newly-built Crystal Palace Railway Station, into which thousands of people pour daily from all parts of London, a great number of whom come out immediately facing this house.

These premises are massively built of modern construction, having every accommodation and convenience for carrying out an hotel trade.

Cards to view may be had at of the Auctioneer; and printed particulars had of

Messrs Boulton and Sons, solicitors, 21A Northampton Square, Clerkenwell; at the place of Sale; and of the Auctioneer, 19 Tooley Street, London Bridge, S. E.