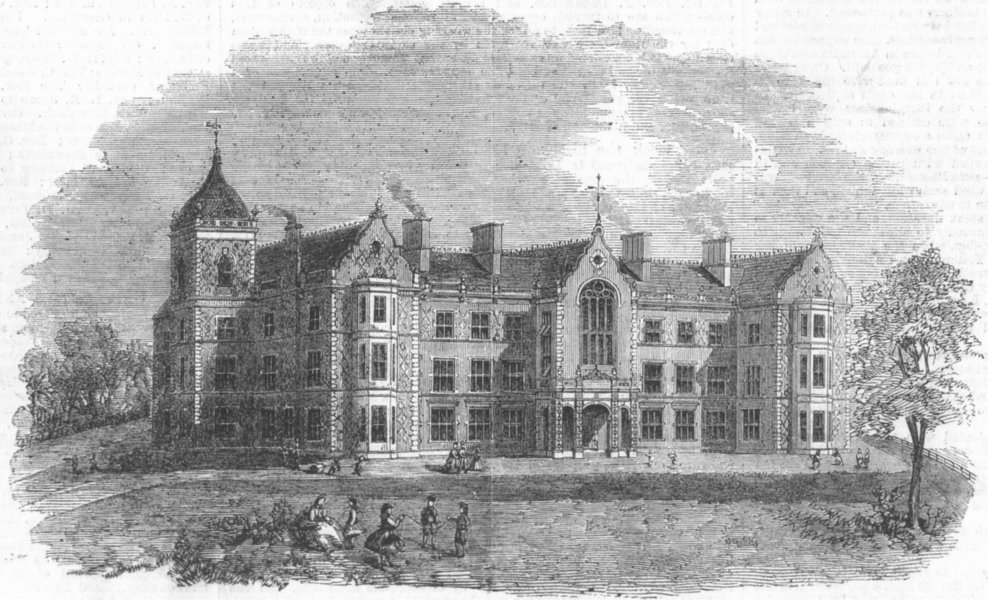 In 1795 the financiers Abraham and Benjamin Goldsmid invited subscriptions from their friends for the foundation of a Jews’ Hospital for the relief of the aged poor and an education for the children of poor families.  In 1861 Sir Anthony de Rothschild liad the foundation stone for a new Hospital building to accommodate 220 children, replacing the original one built in 1807 in Mile End Road, London.  It opened in 1863 and cost £23,000 to build as considerable excavation had been necessary because of the slope of the hill.  The entrance gate on the west side of Knight’s Hill was a gift from Henry Keeling, the Hospital’s Treasurer.  A two-storey Porter’s Lodge was built for £323 and some £650 was spent on laying out and draining the grounds and building new roads.  The building was similar to a Jacobean mansion.  It was built in red brick with three storeys and an attic storey set in in the slated mansard roof.  The window surrounds and corner quoins were built in Portland cement.  The entrance hall was accessed through a central projecting arcaded porch.  Above this was a synagogue.  On the other side of the central section were the north and south wings.

In 1874 the Hospital was extended.

The institution housed 159 children, not all of whom were orphans. Some came from poor families and were unable to look after them.

In 1897 the Centenary Hall and two wings to the west of the ogee-capped tower were added as new extensions and officially opened by the Duke of Cambridge.  The buildings cost £20,000 and the amount was raised by the Lord Mayor of London, Sir George Faudel Phillips, who was also President of the Hospital.

Following the Education Act of 1902 a school was established on the site under the auspices of the Department of Education which led to improved teaching standards.    The school closed for three weeks in the summer and in 1904 a holiday home at Margate was opened to provide a seaside break for the orphans.

After their initial training in a trade, the boys were apprenticed.  The boys learned a variety of skills including engineering, making dental appliances, leatherworking, hairdressing, clothing manufacture and office and warehouse work.  Girls were sometimes apprenticed to furriers or bead workers.  Some became nursery governesses.  The majority entered domestic service.

In 1911 the Arnold and Jane Gabriel Home was built in the grounds of the Hospital to accommodate 50 younger children aged between 5 and 8 years.    When old enough the children were moved to dormitories in the main building.

The institution housed some 400 children who rose at 6.30 a.m. to attend synagogue, then breakfasted at 7 a.m.  the attended school from 9 a.m. to 12 p.m.  Lunch was served at 12.30 p.m.  School began at 2.30 p.m. until 5.00 p.m.  Supper was at 6 p.m. followed by attending synagogue.  Senior girls only attended school in the morning.  In the afternoon they did domestic duties including housework, cooking, cleaning, sewing and darning.  Once a month, on a Sunday afternoon, for those children who had families, parents and relatives were allowed to visit them for 2 hours.

In 1928 the institution was renamed the Jewish Orphanage.

At the outbreak of war in 1939 the children were evacuated to private homes in and around Worthing.  The Staff were left to enlist or help in the war effort.   The Orphanage buildings were taken over by the London Fire Brigade as a training centre.  The children were moved in 1940 from Worthing to Hertford.  After the war the children returned but the insularity of life in the Orphanage and its intimacy was never recovered.  The children began to attend local schools instead of being taught on the premises.   Family members were allowed to visit frequently.  Older children were given more privacy with curtains installed to divide up the large dormitories.  Small, single-sex family groups of children of mixed aged were established with house parents in charge of each group.  The number of children began to decline.

In 1956 6he Orphanage was renamed the Norwood Home for Jewish Children.

In 1957 two family sized houses – Samuel House and Stephany Morris House were built in the grounds to provide the children with a more home-like environment.  By 1961 7 houses had been bought in neighbouring streets and some 100 children were accommodated in these homes with their house parents.

In 1961 the building was demolished and the President of the Home Peter Samuel laid the foundation stone for the new synagogue – Norwood Hall.  This became deconsecrated in 1974 after the Council bought the land and then a community centre until 1997 when it fell into disuse. The remaining funds of the orphanage were transferred to a charitable trust which today is known as ‘Norwood’.