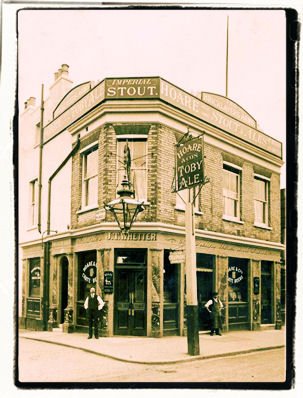 Built at the time of the rapid expansion of London in the 1860s the name was not an uncommon choice for a public house.  The Norwood brewery stood four doors along from the ‘Brick’ as it later affectionately became known.  Whether the brewery supplied the Brick is uncertain as it was built some years after the Brick.

The Bricklayers Arms was occupied by the Wallis family for many years and as it was reported in 1887 that they had lived at the Bricklayers for more than 40 years they appear to have been there since1837.

Thomas Wallis was born in Highgate, Middlesex to James, a brick layer, and Mary Wallis in 1817.  He married Charlotte Copland in Tooting on 17 October 1837 and by 1841 they had set up home in Park Road, Lower Norwood.  He was listed as a bricklayer in the 1841 census and the couple went on to have ten children all born in Norwood.  Wendy Barnes whose parents Billie and Elsie ran the Brick for thirty years from 1931 suggests that it is likely that Thomas Wallis actually built it.  The Wallis’ were living there by 1851 at which time he is recorded as a ‘bricklayer master, employing three men’.   By 1861 the road had been renumbered and the Bricklayers became number 34 and Thomas is listed as a ‘publican’ and they had the income to employ a domestic servant.

Two of the Thomas’s children later lived also set up in Chapel Road both in the building business.  Eldest son Edward at number 18 as a builder and second son Thomas lived next door to his parents trading in 1881 as a ‘Builder and Grocer’.  Thomas senior died in the Bricklayers in 1889 and was buried in nearby West Norwood cemetery.

The last publicans at the Brick were Billie and Elsie Barnes who managed it from 1931 and became its tenants in 1947 bringing up their four children there until they moved to a smaller public house in Nunhead.  Youngest of them Wendy remembers as a child lying in bed watching the gaps between the floorboards from the public bar below.  Her mother Elsie wrote a detailed and fascinating account of their time at the Brick and I am pleased to say that you can find in full under the memories section for Chapel Road, West Norwood on the Norwood Society’s new website: Norwood Street Histories.

After the departure of the Barnes the Brick was converted into flats and the only reminder of its past in Chapel Road is the sign post.

The Norwood brewery existed in Chapel Road from at least 1851 when it was managed by James lane.  In 1863 it was advertising for a ‘Brewer’s Man’ in the London Weekly Dispatch. By the 1870s it had become Duberly & Brook’s brewery and you may be interested to see that they sold what they called ‘Norwood Pale Ale’ at one shilling a gallon in casks and 2s & 6d per bottle; it is unclear why at those prices any one might purchase a single bottle!  Advertisements for the brewery only appeared in the Norwood News between 1879 and 1880 though the site appears as a brewery on the 1916 OS map and brewery existed on the site until the 1950s when it was known as Beaton’s Brewery.