The Baptist Chapel on Central Hill 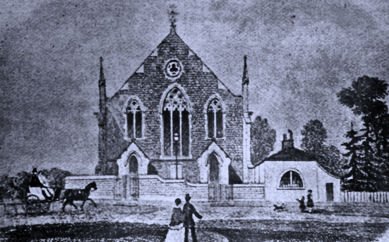 The Baptist Chapel on Central Hill

The 1863 Ordnance Survey map shows the Baptist Chapel on Central Hill prior to the creation of Gatestone Road which was built to the west of the chapel following the field boundary southwards.

The Reverend Samuel Tipple started preaching in the Baptist chapel in 1858 living then in Penge.

Reverend Tipple lived at number 11 Howden Road, Hillcroft, for at least twenty three years between 1890 and his death in 1913.  He was born Samuel Augustus Tipple, to Samuel and Ann Tipple, in Long Melford, Suffolk in 1829.  His father was not from a religious background but by the 1850s Samuel was the Baptist Minister in Wolverhampton.  Roberts described Tipple as ‘whilst in Norwood, South London, a personality and preacher of rare distinction, though never of popular fame’.   The Reverend Tipple preached at the Baptist Chapel at the corner of Central Hill and Gatestone Road.  (Milligan, 1961)

The Reverend Tipple was described as having ‘a slight, frail figure with broad forehead, thin-lipped mouth and sensitive personality…..he seemed to preach with his whole being, down to his very finger tips, and worshippers were held under a spell from the first word of the service to the last’.  Apparently he preached without notes but from memory. (J, 1937-1937).

His sermons were ‘characterised by remarkable range and freshness of thought, absolutely fearless, candour searching psychological insight and delicately sensitive accuracy of expression.’   Four volumes of them were published: Echoes of Spoken Words, 1877; Sunday Mornings at Norwood, 1895; The Admiring Guest, 1896 and Days of Old, 1911.  Selections of from his prayers were published in 1912 under the Title: Spoken Words of Prayer and Praise.

Reverend Tipple married Clara Stacey in 1850, whilst living in Norfolk and they moved to London and he started preaching in the Baptist chapel in 1858 living then in Penge.  They had five children, Horace 1852, Gertrude 1857, Frank 1859 Maude 1862 and Elsie 1872.  None appear to have married but Horace fathered a son with his father’s caretaker’s wife Mrs Heasman.  Henry Heasman was overseas serving in the army for four years.  On returning he found his wife had given birth to a son and seeing a likeness to Horace challenged him.  As a result Mr Heasman was granted a decree nisi in 1921. (Photo Sets Man Thinking, 1921).

In 1910 number 11 was broken into by Henry Barrett and Edward Thompson, both 17.  They were found hiding under a bed by PC Vinn who had been called to the house.

Samuel Tipple died at home at Hillcroft on the 18 December 1912; leaving a not insubstantial amount to his widow Clara.  He was buried in St John’s, Shirley, as the church yard of All Saint’s had been closed in 1869.