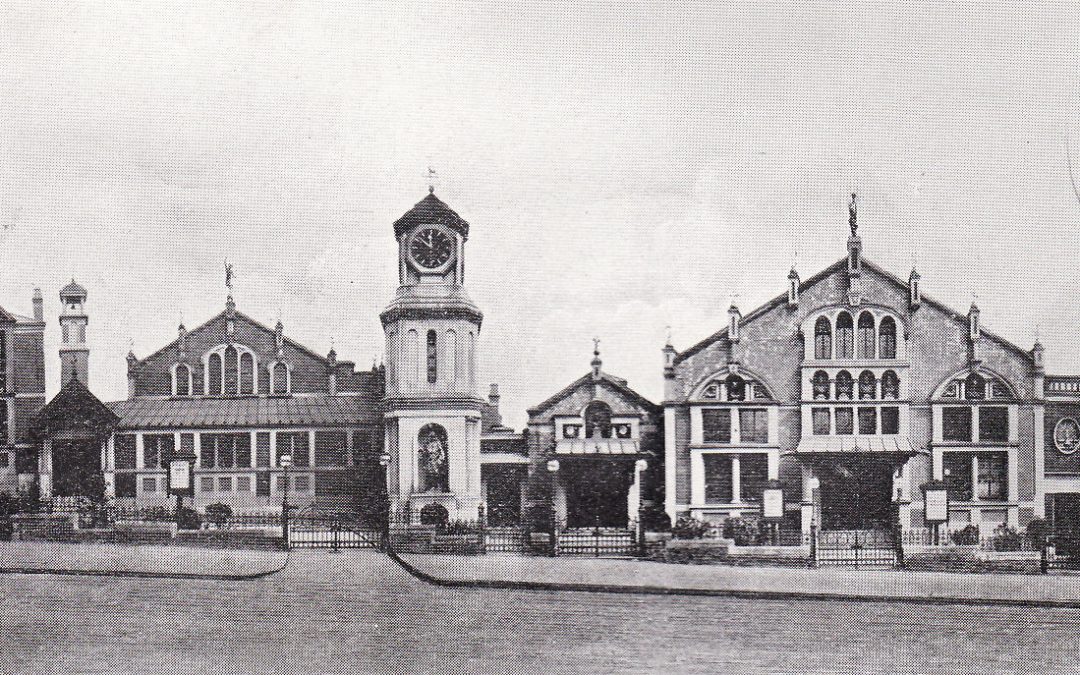 With the £120,000 raised from floating his business, The Stanley Works, on the stock market William F. R. Stanley announced that he would “provide the district with a well needed Public Hall” (Norwood News, 1901). The buildings were completed in stages with Stanley Public Hall (the main hall and art gallery) opening in 1903, the clock tower and second hall added in 1904 and the Technical Trade School in 1907. Two assembly rooms and offices were added in 1909 to complete the complex. 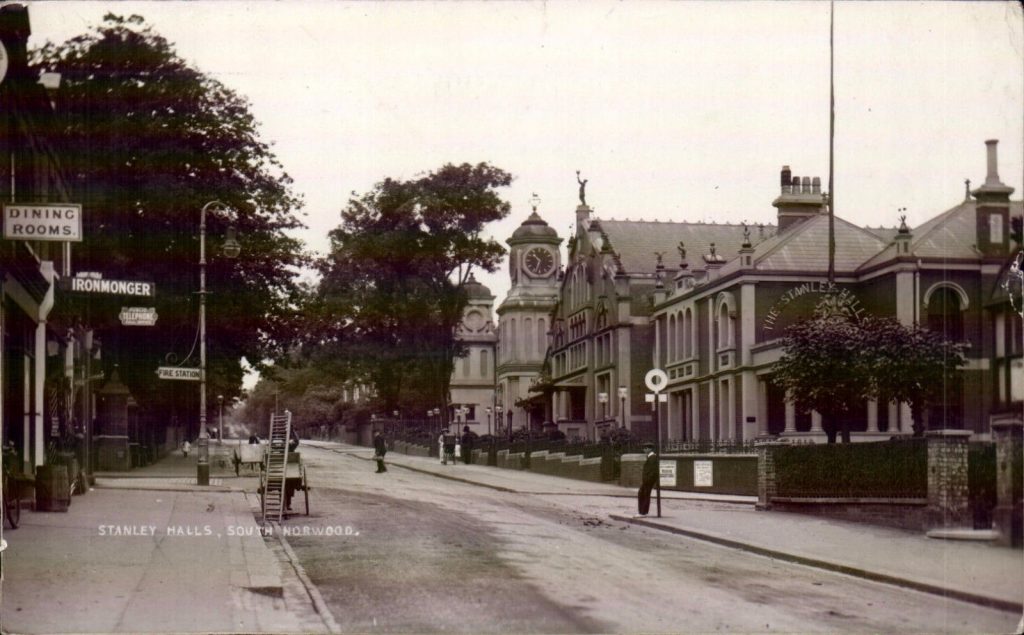 The Halls and Trade School next door (now the Harris Academy South Norwood) were designed by Stanley himself.  William F. Stanley (2 February 1829 – 14 August 1909) was an inventor, manufacturer and philanthropist. By the age of 16 he began to study engineering and phrenology at the London Mechanics Institute. In 1854 William set up his own business in Holborn making mathematical and drawing instruments.

He invented the t-square, the panoptic stereoscope and a straight line dividing machine; the latter won first prize in the International Exhibition of 1862 and guaranteed his fortune. Stanley moved his factory to South Norwood in the mid-1870s. Called The Stanley Works it was located near Norwood Junction railway station and by the 1880s employed 80 local people in the production of instruments for civil and military clients. By 1903 the firm was the largest of its kind in the world and operated in South Norwood until 1926 when it moved to New Eltham.[1] 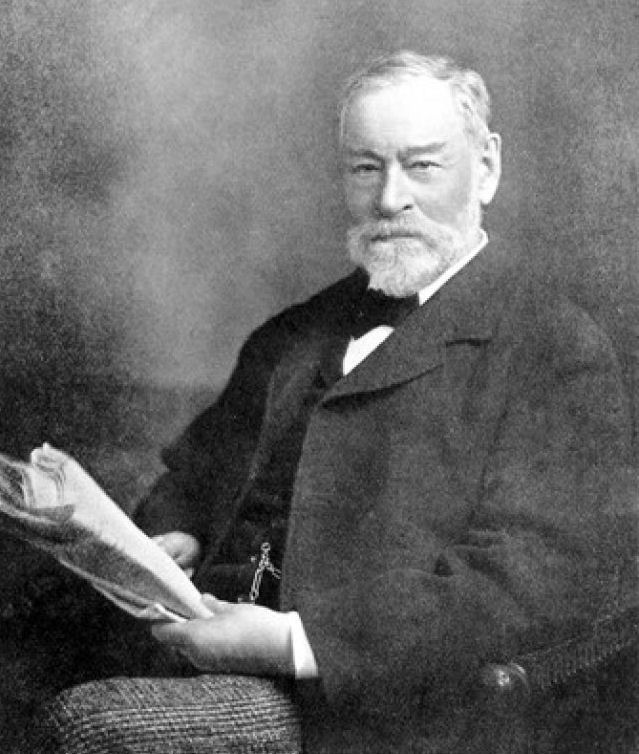 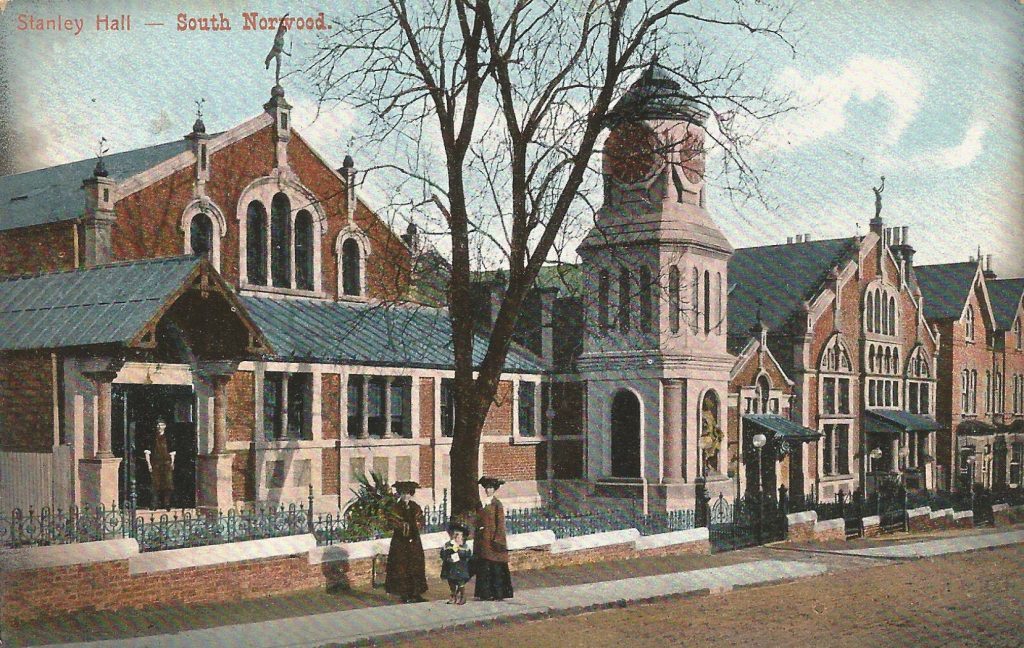 The Stanley Halls continue in use for a variety of purposes now administered by the local authority and a blue plaque on the facade records brief details of William Ford Robinson Stanley. These interesting and singular Edwardian buildings deserve to be better known. In recent years theft and vandalism have taken their toll but there is still much to be seen. The busts of Shakespeare, Faraday and Co over the entrance to the main hall have been stolen (GLIAS Newsletter February 1980) and Mr Stanley’s bust over the door to the former Art Gallery is no longer there. Beside the door a plaque even now advertises that admission to the Art Gallery is free. No doubt some of Mr Stanley’s paintings once hung there.

Inside the main hall grills for the warm air ventilating system devised by Mr Stanley can still be seen and the heating boilers are still in the basement. Throughout the buildings the interior detailing and woodwork is excellent and there are some very nice tiles. Over the proscenium arch in the main hall an inspiring slogan is emblazoned which in several ways expresses ideals Mr Stanley would one feels sure like to be remembered by. Bob Carr