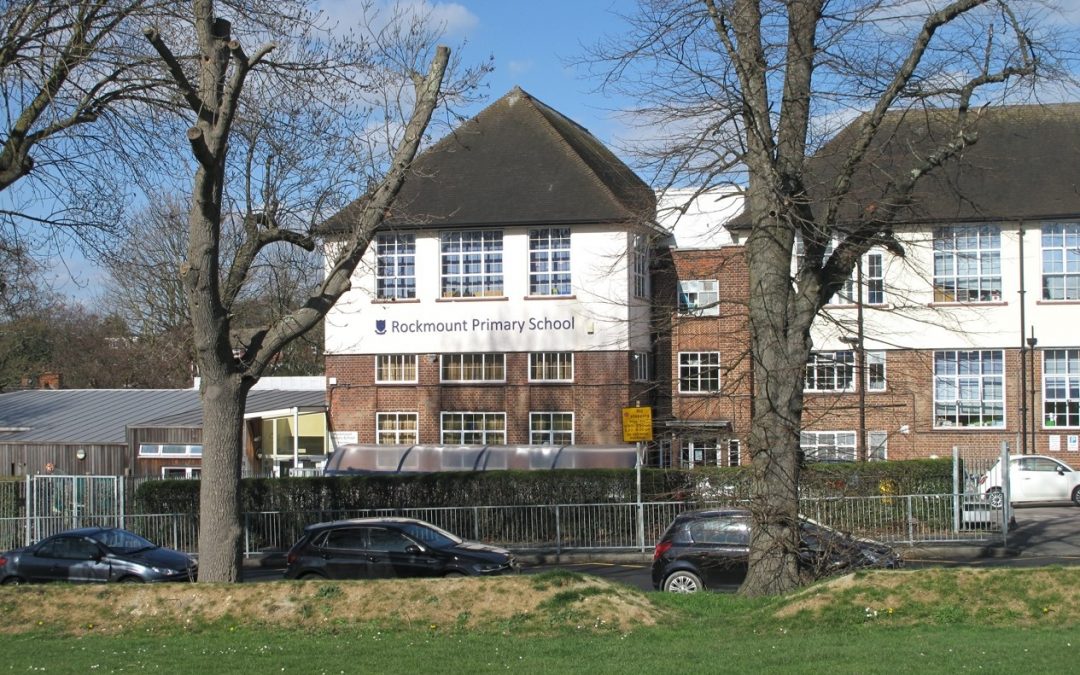 From 1880 education was made compulsory for children aged five to ten years, five to twelve years in 1900 and in 1918 fourteen years.  Upper Norwood Infants’ School/Rockmount Primary School opened on August 21st 1882.    The cost of the school building was £5,684 from land sold by Mr E. Bird of Selhurst.  Reference to the proposed new roads including Rockmount were given in the Health and Sanitary Minutes 1878 concerning the re-laying of the sewer because it crossed the Essex Lodge estate at an awkward line for making a road over it.

Rockmount School had a separate infant and junior school with two entrances into the building; one at the front of the building for the juniors and a second at the rear for the infants.  It was known as the ‘little’ school. The entrance at the front led into a small porch where children hung their coats on hooks. The Headmaster Mr. Hewlett head of the junior school sat to the left of the entrance at his desk.  To the right of the entrance was a small classroom.  The playground at the back contained a water tap and the girls’ toilets.

On May Day a Maypole with long ribbons would be erected in the playground for the children to dance around.  The school entrance at the back led up to three classrooms.  The main hall held assembly and prayers before school started.  Reference is found in both the 1891 and 1901 census returns to Mr and Mrs John Wright.  He is listed as a schoolteacher at the board school – namely Rockmount School.  In 1891 the census records a May Morris who was the head schoolmistress.

The recreation ground opened in 1890 and was welcomed by the school and neighbourhood.  The cost was £9,553.  A fence of posts and iron rails surrounded the recreation ground. The rails were used by the children for turning somersaults.  There were curved pathways with shrubs and trees.  In the middle was a bandstand.  A stone fountain was presented by S. Tufnell-Southgate in 1891.  Six iron benches were placed around the recreation ground.[i] 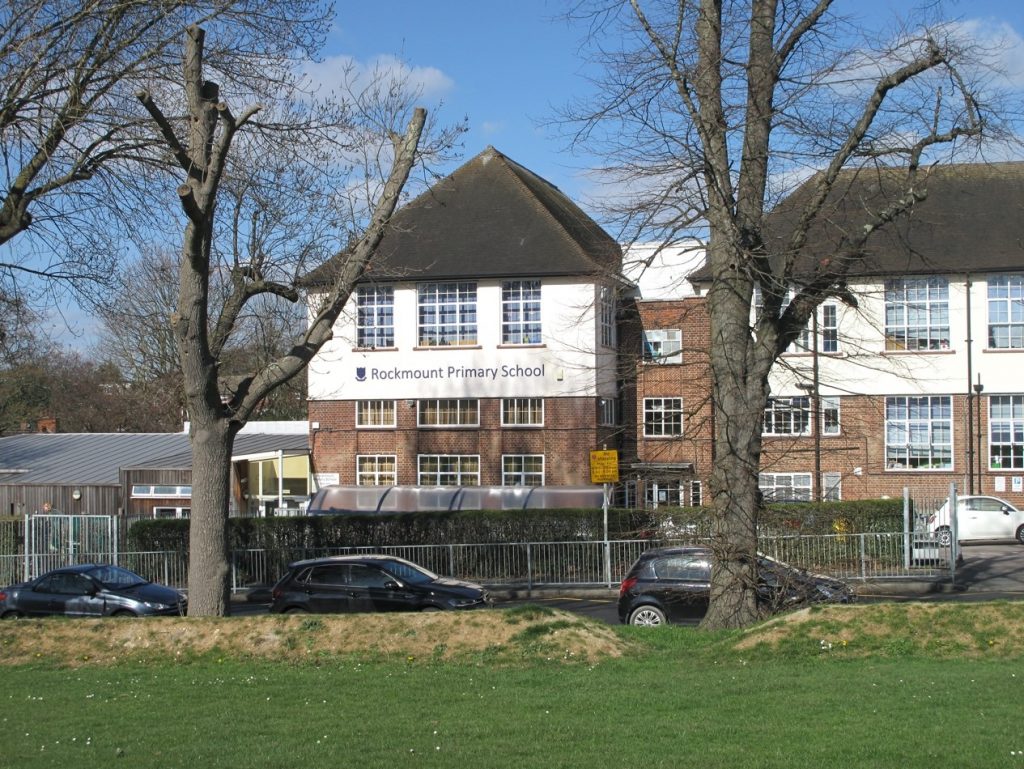 In 1907 the Norwood News reported:

ROCKMOUNT ROAD COUNCIL SCHOOL The annual distribution of prizes and certificates, and exhibition of work, took place at the above school on Tuesday afternoon, 14th inst. The proceedings commenced in the Infants’ Department, when the school was thrown open at 2 o’clock for the exhibition of work. This was followed by a short entertainment consisting of kindergarten games by the tiny tote, nursery rhymes in character, Nature game, ” The Seasons,” and musical drill. The whole was greatly appreciated and enjoyed by the large number of parents and friends who were present.

At the conclusion of this part of the programme, and after a short and interesting address by the chairman, Councillor Peck, the distribution of prizes and certificates was made to the successful scholars, Mr. Peck saying a few words of congratulation to each recipient. The following are the names of the prize winners. For proficiency : Charles Pritchard, Sarah Eagles, Percy Turley, Arthur Tilley and Amy Croombridge. For attendance : Bertram Land, Leonard Land, Ernest Tester and Ethel Lloyd. A large number of certificates for attendance were also presented, both prizes and certificates being in excess of last year.

In proposing a vote of thanks to the chairman for so kindly and ably presiding, Councillor Betteridge spoke a few words in his usual happy manner to the teachers and children, congratulating both on what had been done. This was cordially seconded by the Rev. C. Bokenham, vice-chairman of the Croydon Education Committee, and formerly visiting member of the school. Other visitors permitted were the Rev. H. M. Lake, Mrs. and the Misses Peel, Mr. and Miss Overbury, Mrs. Morris, of the Lambeth Schools, Mrs. Charles Morris, and Miss Appleton, organiser and inspectress of physical exercise. (girls and infants) to the Croydon Education Committee.

The singing of the National Anthem, and cheers for the chairman and Miss Fifield and her staff, brought the happy meeting to a close in the Infants’ Department. In the senior department William Dever and Margaret Bennett gained certificates of distinction. William Dever, Fred Reynolds, Maud Blake, Dorothy Bennett, Edith Harvey, Mary Kemp, Maud Smith, Albert Lingley, and James Eagle received prizes for proficiency. May Kemp’s maximum of marks was the highest of the school. A large number of prizes in the shape of books, work-baskets, boxes of water colours, and mathematical instruments were presented for attendance; 76 also received certificates. Many gained the LS.S.A. first class certificate. Joseph Kanter and William Dever on Saturday last received a prize and certificate respectively in the R.S.P.C.A. competition.

The head master (Mr. F. Hewlett),after giving his report on the progress and condition of the school, thanked the parents for attending in such numbers, and expressed the opinion that greater facilities for entering the recreation ground would be desirable. He also thanked Miss Peel and Mrs. Overbury for their great kindness in carrying out the duties of treasurers to the Penny Bank and Boot and Shoe Clubs. It may be mentioned here that these two clubs are sadly in want of funds, and any contribution would be thankfully received and worthily applied. Mr. Councillor Peck, Mr. Councillor Betteridge, and the vice-chairman of the Croydon Education Committee (Rev. C. Flokenham) addressed the audience and children. Mrs. Morris, on behalf of the parents, expressed thanks to the teachers for their kindness, care, and attention to the boys and girls. Mr. Nicholls also addressed the children in very well-chosen words. Songs were rendered by the scholars in a manner that reflected credit on Mr. H. S. Warrington, their conductor.

In celebration of the coronation of King George V and Queen Mary in 1911, communal school sports were held on the recreation ground.  Children at Rockmount School were presented with a Coronation medal and a bag containing chocolates, cake and sweets etc.  The scholars then marched onto Upper Norwood Recreation Ground where they were joined by children from All Saints School, Ingram Road and St Joseph’s schools.  The children sang the National Anthem followed by three cheers for the King and Queen.  Each school contested a number of events for boys and girls.  Several hundred parents were present.[ii]

In 1930 a new school was built to take up the overflow of the children and to  accommodate the junior school which was called The Rockmount Senior School.  It was for children aged up to 14.    It was a large two-storey glass building with much of its fascia taken up by glass windows.  It had a large hall at ground level and at the opposite end a large room for woodworking classes.  Above this on the first floor was the domestic science room.    The large playground catered for girls’ netball, football, rounders and race days were held on the recreational ground opposite.

The Norwood News reported in July 1942:

Although they look rather serious, they really enjoyed themselves at the handicraft exhibition at Rockmount Infants’ School on Wednesday. A model fair Is in the foreground. Maurice Jefteries and Betty Martin, Rockmount School pupils, who gained outstanding successes in recent scholarship examinations.

HONOURS FOR ROCKMOUNT Scholarship.  Rockmount School has gained a double honour in the scholarship examinations, the results of which were announced recently. For the first time a boy, Maurice Jefferies, Highview-road, has won a scholarship to Whitgift Grammar ‘School. and at the same time a girl. Betty Martin. Hermitage Road, has obtained a scholarship to the Croydon Girl’s High School. Other results are: Selhurst Grammar School, Eric Parry; Lady Edridge School. Edith Jones, Patricia Poole. Sylvia White: St. Michael’s School. Evelyn Wood; John Ruskin. Derek Brecknock, Michael Jefferies; Heath Clark, James Rockingham. Mr. Frame, the headmaster, is very pleased with this result, and reported that more parents were becoming more scholarship minded and previously many of them wanted the children the start work at 11 but now more parents favoured higher education.

Rockmount-road, Upper Norwood, held an exhibition of children’s art and handiwork in the school hall on Wednesday. Parents and friends were charged 2d. admission and the proceeds were given to the Red Cross. The various exhibits included a fair, drawings and painting, a model of a Galilean village, the Pied Piper of Hamelin, exhibits showing from where the various raw materials such as rice wood, wool, cotton. etc., came. Other exhibits showed the life of children of other lands. The show was visited by the headmaster of the senior school. !Mr. Frame, the education officer l(Mr. H. Robertson) and Miss George, H.M.I. School Gets Photo Of Elgar.

Rockmount School has recently received a photograph of Elgar, the famous British composer, from his only daughter, Mrs. Elgar- Blake. The four school houses are named Shakespeare (English), Gainsborough (Art), Kelvin (Science), and Elgar (Music). Before the war, the head master, Mr. Frame, had been endeavouring to secure photographs of these four famous men, and had received a promise from Mrs. Elgar-Blake that she would supply one of her father. An unveiling ceremony was conducted after the morning assembly and was concluded by the singing of Elgar’s ” Song of Liberty ” from one of his Pomp and Circumstance  Musical appreciation under Mr. J. M. P. Morgan is regarded as an important part of the school curriculum. [iii]

After the Second World War the ‘little’and original school building in Rockmount Road was demolished and part of the old Convent wood in Hermitage Road provided the site for the erection of a new Rockmount primary school.  The alleyway between Little Eagle Hill in the New Town and Rockmount Road to provide an entrance to Rockmount Infants’ School now formed part of the new enlarged playground for the new junior school.[iv]

I started in the Infants at Rockmount Road School in March 1940 at the beginning of World War 2.  The headmistress was Miss Chambers and one of the teachers – Miss Jane.  Because of the air raids I started to stop to school dinners.  On one occasion I recall we had just been served our dinner, and the siren went.  When we returned our dinners were cold and the boiled ham was laying in a pool of grease.

The air raid shelters were built right next to the playground.  As soon as the siren went we were escorted across the playground and into the shelter.  I remember it was dark and dank there.  We proceeded to sing ‘Ten Green Bottles’ and various other songs.  A lot of the pupils were evacuated but I stayed in Norwood.  A policeman used to come to give us information about not picking up devices (like pens) which the enemy were dropping to kill people.  They were in fact small explosives and were meant to kill.  Our mothers took it in turns to escort us to and from school.

Going back to the war years; many bombs fell in the surrounding area near to the school but not actually on the school building itself.  During these years there was a Barrage Balloon Unit stationed on the Eversley Road side of the recreation ground opposite the school.  It was manned by the WAAFs.  There was also a static water pond dug at the Harold Road end.

The original school in Rockmount Road was a big Victorian building with a “modern” addition built in Chevening Road, probably in the late 1920s or early 1930s.  I went up to the Junior School in 1945.  I didn’t pass my matriculation test at eleven so never went to a grammar or high school.  I spent the last year of schooling at Ingram Road Girls’ School in Thornton Heath.

My mother, her sister and two brothers also attended Rockmount Road School in the 1900s.

I returned to Rockmount to do school cleaning whilst my children attended school.  Mr Quested, who was headmaster, was still there.  I was still working at the school when the new Skoda block was built across the then bottom of Eagle Hill.  My youngest son attended the new Infants’ School in Hermitage Road in approximately 1971 after the old school was demolished in Rockmount Road. 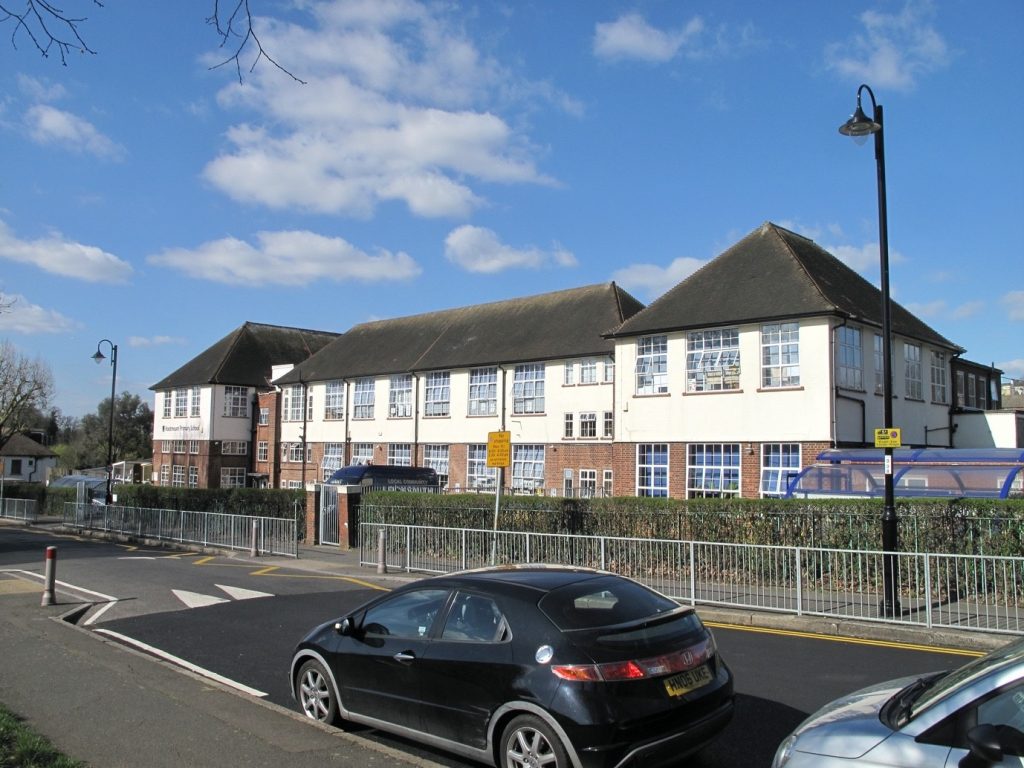