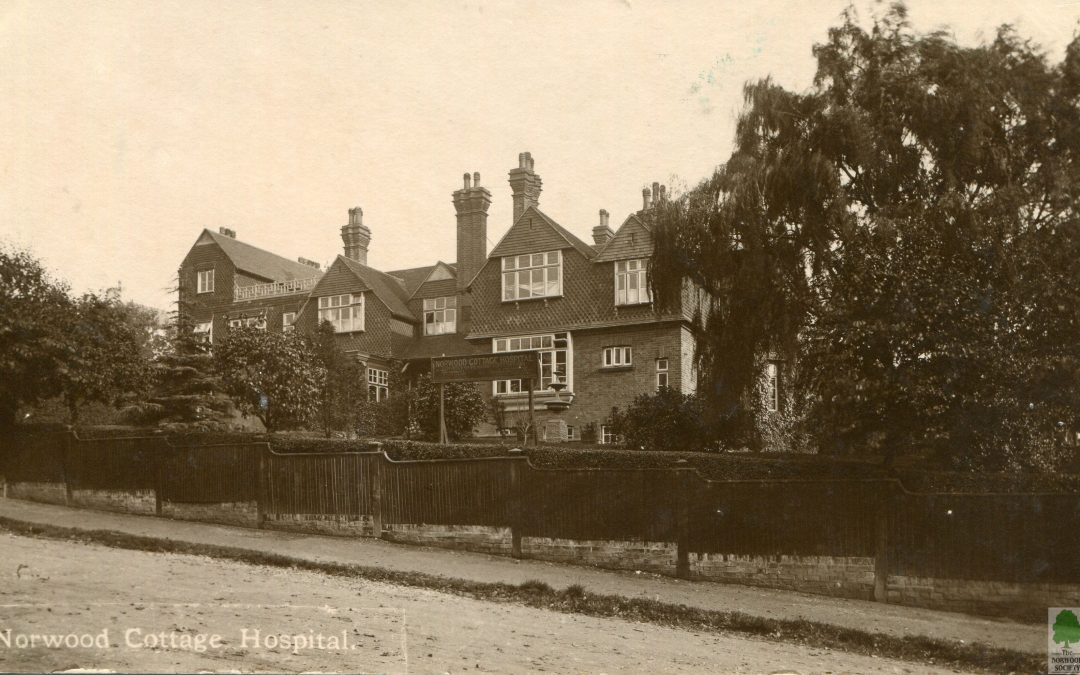 In 1880 a committee was formed to establish a cottage hospital which would provide treatment for the sick poor of Norwood and the surrounding suburban districts.  An Appeal was launched and was met with enthusiastic support.

It had been hoped to acquire a suitable site somewhere near Sydenham, but this proved difficult to find.  Eventually a piece of land in Hermitage Road was chosen, on the basis it was on high ground and a short distance from the central point of the district.

The Norwood Cottage Hospital was officially opened in October 1882 by the Lord Mayor of London, Sir John Whittaker Ellis.  The banker and politician, Sir Ernest Tritton (1845-1918) became its President.

Built of red brick in the style of a small cottage, the Hospital had 8 beds.  Its frontage of 130 ft (40 metres) ran parallel to Hermitage Road; the building had a depth of 155 ft (47 metres).

The Hospital was extended in 1887 to include more bed accommodation.

In 1894 the Hospital was considerably extended and again, in 1898, when the premises were also reorganised.

In April 1922 a War Memorial was erected at the corner of Church Road and Westow Street and, at the same time, an endowment was provided for the Hospital as a lasting memorial to the men of Upper Norwood who had lost their lives in WW1.  Of the £2,400 raised by the time of the unveiling of the Memorial, some £1,500 had already been paid to the Hospital.  (In 1956 the War Memorial was moved to a new site in Westow Street).

In 1925 additional land was leased and the Hospital frontage was extended to 295 ft (90 metres).

To celebrate the coronation of King George VI and Queen Elizabeth on 12th May 1937 the interior and exterior of the Hospital were decorated, and patients and friends were invited to tea.  The buildings were floodlit at night (free of expense) throughout the week, and the gift of two pianos was made, one for the male and one for the female ward.  Later in the year further improvements were made to the Hospital and a rearrangement of various departments took place.  The Hospital had 32 beds, 2 of which were reserved for accident cases.  In 1938 the cost of an in-patient per week was £3 15s 2d (£3.76), compared to £4 5s 7d (£4.28) in 1937.  The average stay of an in-patient was 16 days.

During WW2 the Hospital became part of the Emergency Medical Scheme, reserving 7 of its beds for service personnel and civilian casualties.  On 29th June 1944 the buildings were severely damaged by the blast of an exploding V1 flying bomb, which fell on the corner of Hermitage Road and Central Hill.  The patients were evacuated to Horton Hospital, but the Hospital continued to operate as a First Aid Post.  The wards reopened two months later on 22nd August.

In 1994 the Hospital purchased four special beds for abdominal cases, following a special donation from Mr J.R. Peers in memory of his son who had died of wounds in North Africa.  By this time the Hospital had 34 beds and the cost of an in-patient per week was £8 0s 9d (£8.04).

After the war, in 1946, a Nurses’ Home was provided at 76 Central Hill.  It was officially opened in December by Lady Luke, the wife of the President of the Hospital.

By 1947 the war damage had been repaired.  The entire Hospital was newly equipped and had been painted internally and externally.  It had a well-planned and cultivated garden.  There was a new Nurses’ Home and plans were made to build a new Out-Patients Department with double the existing accommodation, as the Casualty Department was so busy.  Penicillin had been made available generally and was now used extensively in treatment.  In 1947 the cost of an in-patient was £10 3s 2d (£10.16) a week, compared with £7 19s 2d (£7.96) in 1946.

The management committee planned to build a new 800-bedded hospital on a new site at some time in the near future, but the project was delayed because of the Hospital’s entry into the NHS.

In 1948 the Hospital came under the control of the Croydon and Warlingham Park Group Hospital Management Committee, part of the South West Metropolitan Regional Hospital Board.

In 1953 its name was changed to Norwood and District Cottage Hospital, the ‘and District’ being added because a greater scope was being sought for the Hospital.  In 1954 it had 38 beds managed by the local GPs.

In 1974, following a major reorganisation within the NHS, the Hospital came under the control of the Croydon District Health Authority, part of the South West Thames Regional Health Authority.

In 1983 the wards were temporarily closed.  The Hospital reopened in 1984 as a facility with 22 beds for mentally handicapped patients.

The Hospital buildings are now under the administration of the Surrey and Borders Partnership NHS Foundation Trust.  The buildings became Canterbury House, a residential care home, and York House, for severely mentally handicapped adults.

In 2003 Canterbury House was declared surplus to requirements and placed on the market.  It has remained vacant.

A potential buyer had been found for Canterbury House in June 2009.  It is proposed to demolish the building and to build a 63-bedded care home on the site.

York House is to remain as a residential home for adults with varying degrees of physical and mental handicap. 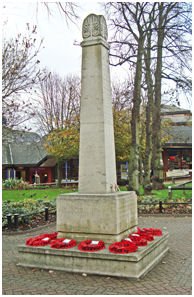 The base of the Memorial states:

“As a lasting memorial an endowment for the Norwood Cottage Hospital was provided and this monument erected“.