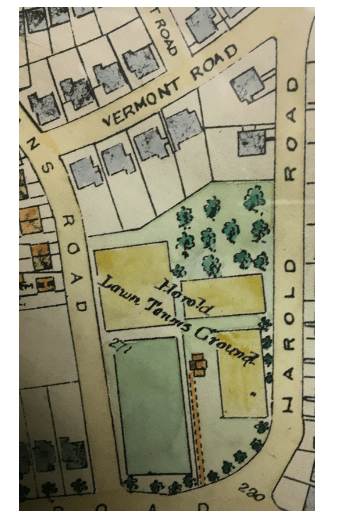 The Harold Lawn Tennis Club was opened in 1887 and occupied the land bordering Orleans Road, Vermont Road and Harold Road. The grounds covered 3 acres, and included seven grass courts, a club house, and a croquet lawn – later adding four hard courts. In his memoirs (The Norwood Society – I Remember Norwood (1963)) A R Llewellin-Taylour refers to the flourishing club and the tennis parties held in the late 1800s. 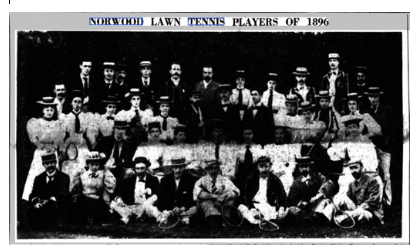 Albert Prebble (22.10.1873-27.8.1946) who captained The English Badminton team, won the All England Badminton Men’s Doubles three times in 1904, 1907 and 1909, and also the mixed doubles with Dora Boothby in 1909. Together these two also reached the Wimbledon Lawn Tennis Mixed Doubles Final.  He was also Vice President of the English Badminton Association from 1922 to 1946. In tennis he was captain of the British Davis Cup team six times; 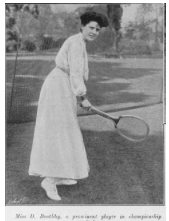 Harry Penn        Stepfather to Dora Boothby, and resident at 40 Harold Road. Appears with his daughter in the 1896 press photograph, above.

Edward Charles Stuart Baker (18   – 16.4.1944) was President of the Club in 1936, resident of 6 Harold Road, former Mayor of Croydon. He lost an arm whilst tackling a panther as part of his police duties in India.

The club closed in 1956, and the land was sold to developers. The properties at 47-65 Harold Road now occupy part of the site.