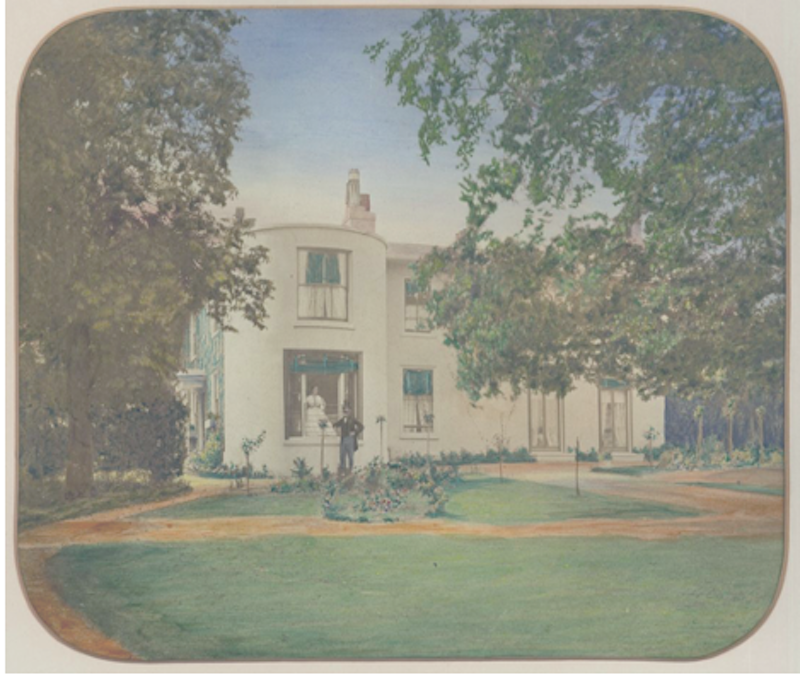 The buildings now standing on the west side of Knights Hill opposite St Luke’s church and its churchyard are not the first on that land. Before they were erected at the end of the 19th century, the area they occupy and also that of Nettlefold Place were within the boundaries of a substantial villa called Elm Cottage and its extensive grounds.

Elm Cottage was built by 1841 when Charles Turner, the perpetual curate of St Luke’s, was in residence accompanied by his second wife Sarah, his daughters Mary and Emma and also Celia Turner (in the 30-34 age group) who was apparently Charles’ sister. The family were attended by three resident female servants.

The 1851 census introduces Elm Cottage as ‘Parsonage House, Knights Hill Road’ with Charles Turner still the householder. At 57 years of age he was eight years older than his wife Sarah Ann. The family had grown during the previous decade. Charles’ children who were resident on the census night were Matthias Cathrow (aged 20) who was studying at the Inner Temple, Mary Caroline (19), Emma Celia (11), Charles Stephen (8) and George Knapp (2). Again, three female servants were present.

During the following decade, the peaceful setting of Elm Cottage was disrupted by the advent of the railway. The Horns tavern and cottages that stood immediately south of the villa were demolished and a cutting excavated so trains could pass under Knights Hill on their way to the new station on the other side of that road and onwards to the Crystal Palace. The level of Knights Hill as it passed Elm Cottage itself appears to have been built up in order to meet the elevation of the road bridge constructed over the cutting. However, comparison of the 1843 tithe map and the Ordnance Survey of 1870 confirms that only a very small sliver of land was taken from the grounds of Elm Cottage for the railway. By 1861, The Horns tavern was operating from newly-erected premises built on land not taken for the railway, providing a partial barrier between Elm Cottage and the smoke and other disturbance from passing engines.

Rev Charles Turner died in 1858. He was evidently a man of means as the value of his effects alone was stated to be ‘under £6,000’ which implies the precise amount was not a great deal less than that figure. His successor as incumbent of St Luke’s was Dr John William Lester who the 1861 census records as living at a house in Lancaster Road (now Lancaster Avenue). Elm Cottage is not identified by name in that census but appears to have been the uninhabited house recorded immediately north of The Horns.

The advent of the railway led to major changes in Lower Norwood. Among the areas laid out for development in the Blooms where backing on to the western and southern boundaries of Elm Cottage had been completed by 1870. 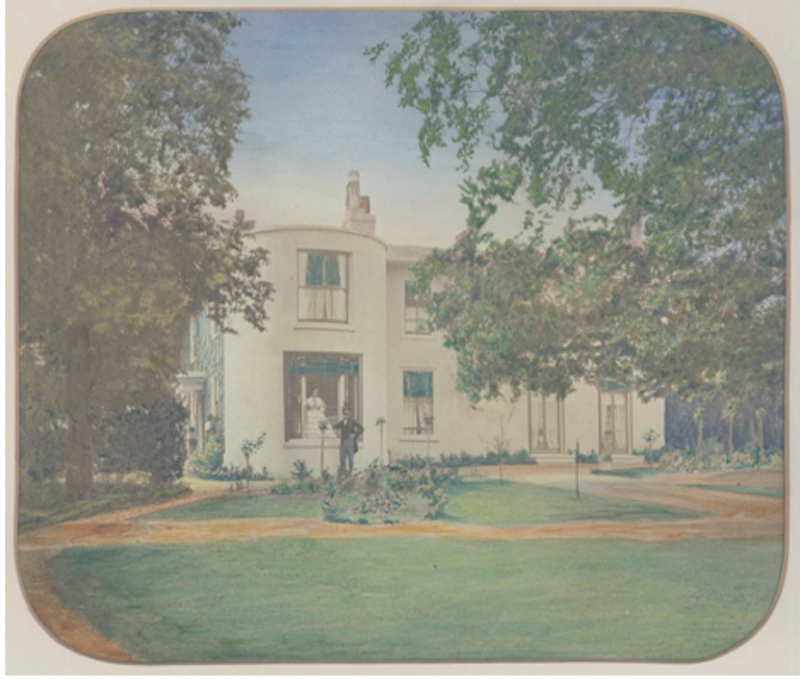 These substantial buildings combined with the proximity of the railway greatly reduced the appeal of the villa to the class of occupier who had formerly lived there. On census night in 1871 the inhabitants of ‘Elm Villa’ were Henry Adams, a 62-year- old gardener, his wife and four children. The size and character of the building were such that it is unlikely normally to have been used just by a gardener and his family. Presumably, Henry’s employer was absent on census night or he was minding the property whilst the owner sought a tenant or purchaser.

One of those who lived at Elm Cottage in the 1870s can be found in the Norwood News, which on 10 November 1877 reported that Arthur Mellor from that address was fined 20 shillings for buying a third-class railway ticket to the Crystal Palace but travelling in the first-class carriage. His lawyer suggested that being a ‘mere boy’ Arthur did not think he was doing wrong. However, as the culprit was 18 or 19 years old this argument did not impress the magistrate.

No doubt because of the changing character of the immediate area, it seems there were further difficulties in attracting an occupier of suitable calibre, as Elm Cottage was unoccupied at the time of the 1881 census. However, on 3 June 1882 the Norwood News contained an advertisement by Messrs May & Bromley that they had let Elm Cottage and intended three days later to sell at auction the furniture that had been left there.

In May 1888 the buildings along the northern part of Knights Hill were allocated street numbers, with some in the sequence reserved for plots that had not yet been developed. Five structures already in place between Bloom Grove and Nettlefold Place were given the numbers 2 to 10 (even). After that came the Post Office (12) followed by the Library, which was then under construction (14).

Next, three numbers were reserved for a plot of ‘building ground’. Elm Cottage was assigned number 38, eight numbers having been dropped for properties expected to arrive on the modest remaining portion of its original grounds. Sir Frederick Nettlefold (1833-1913) had donated the land on which the library was built but it is not clear whether he had acquired other parts of the Elm Cottage estate which were being developed at that time.

The occupier of Elm Cottage in 1888 was Lieutenant Colonel John Cockerell Phillips (1814-1892), who had retired many years previously after service in the Army of the East India Company. When the census was held on 5 April 1891, he was still at Elm Cottage heading a household which included his wife, three adult children and a grandson. A cook, nurse and housemaid completed the establishment. The family did not remain at Elm Cottage for long afterwards; when he died on 10 October 1892 Lieutenant-Colonel Phillips’ home was 14 Royal Crescent, Notting Hill.

By 1894 Elm Cottage had been demolished – the Ordnance Survey map of that year shows a continuous line of development along the frontage of Knights Hill between the Horns and Bloom Grove.